A Review of Count … The Legend of Dracula

Lake Erie Ballet dances with darkness in this season's production. 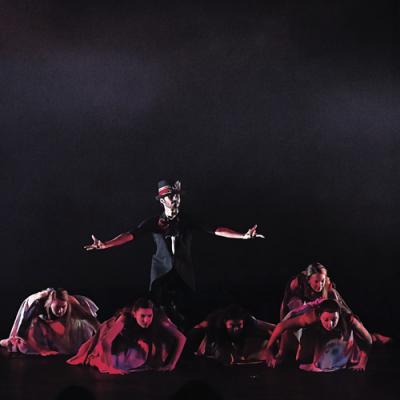 If there were ever a proper season to mount a ballet production with these themes, Lake Erie Ballet (LEB) has accomplished it with Count … The Legend of Dracula.

Based loosely on Bram Stoker's classic horror novel, local choreographer Bobby Wesner's version keeps the main characters alive, retelling the story of a dark attraction while jettisoning much of the latter search-and-destroy aspect of the tale. (Sorry, Van Helsing fans.)

Rather, this version focuses on the love triangle between the betrothed couple Jonathan Harker (Francisco Aguilar) and Mina (Izabelly Possato) and its shadowy, stygian interloper Dracula (Jose Soares) in a dangerous pas de trois.

A collaboration between LEB and Wesner's Neos Dance Theatre, a troupe based in northern Ohio, Count features two of Neos' performers, Juliana Freude and Ethan Lee, in the secondary roles of Mina's friend Lucy and her fiancé Arthur. On a tertiary level, approximately 16 members of the LEB Youth and Junior Youth companies serve the production's background as tiny dancers in various scenes.

More romantic and even less bloodletting than the Victorian archetype of the 1897 novel — apparently so popular it's never gone out of print — nary a drop of blood is spilled; instead, the production focuses on a verboten love and creating an ominous, dream-like mood.

As audience members watch, they're bound to feel more empathy than enmity for Soares' Transylvania count.

In this version, years ago (or is it centuries?), having killed a gypsy to protect himself and his beloved, Dracula, the man, was accursed to become a member of the undead. "Living" forever, he thirsts for the blood of others while eschewing daylight in his eternal Cimmerian existence.

The dance drama truly begins when Harker, a British estate agent, shows up in Dracula's "neck" of the woods (yes, pun intended). Dracula espies Harker's locket containing a photo of Mina — a "doppelganger," if you will, of the count's long-deceased love — and therein supernatural peril ensues for the lovebirds.

A background screen flashing lightning, Mina's locket photograph, and other imagery assist in explaining and propelling the story forward in ways that couldn't be related through dance.

Meanwhile, the production's soundtrack ranges from classical compositions, to medieval chants, to Tom Waits, to the angst of contemporary "industrial" music that  mirrors the splendor and sturm of characters' emotions.

Count is being performed at 1020 Holland Street, soon to be the new location for Lake Erie Ballet.

"That's the plan," said Rick DiBello, LEB's executive director, via email. "[The] first floor will have studios and offices … The second floor has a 30-foot ceiling and will be a performance space with a stage, recording gear, projectors, etc."

Indeed, Lake Erie Ballet appears to be on a roll: what with a ballet company moving and, with Count … The Legend of Dracula, a moving ballet.