A Sense of Placement

We need to make our marks outside our comfort zones

by Liz Allen
View ProfileFacebookTwitterRSS Feed
February 28, 2018 at 11:45 AM 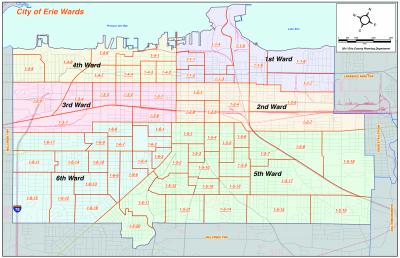 eriecountypa.gov
One map thatu2019s been consistent for some time is the City of Erie and its six different wards. Regular voters will recognize them when itu2019s time to elect District Judges, and for many residents, thereu2019s a longstanding sense of identity associated with these neighborhoods.

Eighteen years ago, after I had been widowed and remarried, my new husband and I were ready to buy a beautiful brick home in south Erie, until my parents intervened.

"I wish you would stay in the Fourth Ward," my dad chimed in.

My mom's notion that I might be "homesick" if I ventured 2.6 miles south of my childhood home on Erie's west side made me smile.

But her observation also reminded me of something that I hold dear about Erie: Our sense of place can be very specific, tight and telling — and sometimes confining. Collectively, we have a hard time adapting to change.

When my first husband and I moved back to Erie in 1984 after living four states away in the Midwest, it only seemed natural that my young family would settle four blocks north of the house where I grew up. We joined the same parish where my siblings and I had made our First Communions and Confirmations. My boys rode their bikes to the nearby drugstore where I once bought Popsicles and Mallo Cups for a nickel, and my husband got his hair cut at the same barbershop that my dad and my brothers patronized.

Of course, some things had changed since my parents moved to Lincoln Avenue in 1956. The butcher shop had become a convenience store, but that was OK, because we could buy lottery tickets there. A bicycle shop had replaced the ice cream parlor, and the bank branch, in a former supermarket, had changed hands several times. Still, the neighborhood character remained intact.

I understood what my mom meant when she suggested that I might be "homesick" if I uprooted myself from such a familiar setting. I would miss being so close to Mom and Dad that we could pop in for dinner or a game of pinochle, and my boys had grown close to their grandparents without actually living under the same roof.

I was a bit more puzzled, though, when my father said he hoped I wouldn't abandon the Fourth Ward. I didn't know the contours of Erie's political boundaries back then.

But it strikes me now that my dad's identification of neighborhood with ward is part of Erie's story. Our world began on the blocks where we knew our neighbors and the proprietors of the corner store and the bakery. Our horizons expanded when we attended Catholic school in the late '50s and early '60s, where a family like mine, with six kids, was average-size. Big families had eight or nine children — and some as many as a dozen or more.

We had so many siblings that we always had playmates at home, and because my friends and I all had younger brothers, we always had enough players for sandlot baseball, even though I was a lousy athlete.

Those deep connections still pay off, as I learned recently.

Shortly after I was elected to Erie City Council, I sought out women who had held public office or who had worked in politics. They advised me to get fired up about issues I'm most passionate about, and to listen to the critics but not to let them overwhelm me.

But I still yearned for a mentor with experience in both journalism and politics — someone who would understand my need to ferret out all the facts and research the history of issues before weighing in or voting.

As I drove to church a couple of Saturdays ago at St. Paul Catholic Church in Little Italy, I was fretting about the odd intersection of journalism and politics in my life.

Halfway through Mass, I had an insight. Jerry Martin, the guy sitting in back of me, was from my home parish, St. Andrew's, which is now partnered with St. Paul's.

I remembered that Jerry's grandfather, Joseph C. Martin, had worked as a reporter and an editor in between stints as an Erie City Councilman and mayor. J.C. Martin Golf Course is named after him, but his legacy goes deeper than that.

When I got home, I grabbed my copy of Erie, Pennsylvania Mayors, 150 Years of Political History, by William P. Garvey, to read about Martin in Chapter 13, "Erie's interim mayors."

Councilman Martin was elected mayor by his colleagues after Mayor Sherman Hickey Jr. died in office.

He served for 16 months as mayor but "chose not to run for a four-year term and instead returned to the newspaper business, his first love, in 1950," according to Garvey's book.

After Martin died at age 87 in February 1986, the Erie Daily Times eulogized him as "Erie's man for all seasons."

The editorial said that "getting the former mayor to say anything derogatory about any of his onetime opponents was like pulling teeth, difficult work. Martin preferred to laugh about the past controversies and tell about the good side of his foes."

Martin himself had reflected on his time in office in a first-person story in the Erie Dispatch on Jan. 4, 1950. He described the "fire of the political world (as) a business which is rougher and tougher, believe me, than anything else I've ever tried."

Those words, from a seasoned newspaperman, was a reminder that serving in public office was difficult decades before social media unleashed and amplified criticism and controversy.

Jerry Martin shared some memories of his grandfather with me. "He was just an all-around guy. He thought outside the box," said Jerry. In addition to serving on City Council and as mayor, Joseph C. Martin was the first administrator of the Erie Port Commission (now the Erie-Western Pennsylvania Port Authority). "A lot of the port work was done with his thought and vision," said Jerry. "He was always proud of that big 900-ton crane used to ship locomotives out of GE. A crane that could pick up a locomotive!"

Joseph C. Martin brought two big golf tournaments to Erie: the U.S. Women's Open and the Public Links Tournament, events that "helped the whole area, that put Erie on the map,'' Jerry said. He also championed building a golf course at Glenwood for the "everyday guy who can't afford to play at Kahkwa."

I wondered if Joseph C. Martin, like his grandchildren, had been a member of St. Andrew's parish. No. "He was a first-warder, St. Pat's," said Jerry. "We have a picture in our house of his family, right at the foot of Holland and Bayfront, on the southeast corner, a big red brick building."

So it wasn't just my dad who tied "ward" and "neighborhood" together.

I've also thought about another line in the Erie Daily Times editorial after Martin's death. "We were always impressed with the fact that this Irish-American politician had taken the trouble to learn some Polish. As you can imagine, in those political days back in the 1930s, it went over great on Erie's east side."

As a journalist serving on City Council, I cherish the fact that I got to cover Erie's stories as they unfolded.

After learning about the late Joseph C. Martin, I'm reminded again about how important it is to step out of our comfort zones if we want Erie to make progress.
Liz Allen

I would welcome the chance to learn some words of welcome from Erie's recent immigrants and new Americans.

LIZ ALLEN still lives only four blocks from her childhood home, but recently ventured to the Polish Falcons Nest 123 to sub as a bowler. She desperately needs to learn how to hit more pins after marking with a strike or a spare.