A Spooky Q & A with Mothboys' Matt Schang

An interview about a podcast quickly rising to international popularity and Baby Ruth bars. 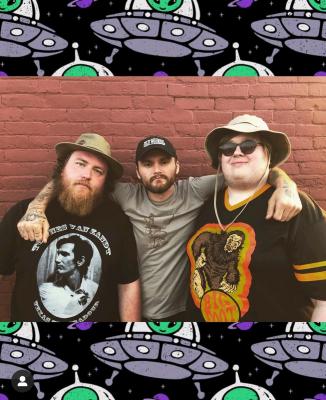 Matt Schang, an Ashville, NY native, has worn many different hats over the years. Currently residing in Erie, the 31-year-old previously co-promoted a copious amount of shows alongside his brothers in their family-owned production company in the Erie and Pittsburgh areas. The former concert promoter is currently a co-host of an internationally popular podcast called Mothboys. Started in March 2019, Mothboys has quickly caught traction. It boasts over 30K downloads, has listeners in every state in the United States, multiple countries, and the hosts have been guests at multiple conventions of the unknown alongside the likes of the creators of shows like Mountain Monsters. The podcast is a family affair, co-hosted with Matt's brother Mike Schang and their lifetime friend, Jake Haskin.

Elvis Andromeda Maryshine: So you are a self-described Horror fanatic?

Matt Schang: Yes! I have always been obsessed with cryptids, legends, and folklore since I was a kid. When I was young I used to bring a manilla folder to school filled with printed out facts about Mothman, El Chupacabra, and all the other weird stuff. I would try to make friends – and it definitely did not work [laughs]. I was a pretty lonely child when I was young. Obviously, I feel like people who are into these types of things are not the most popular. I never quite believed in it, but I was always fascinated by it. I didn't quite believe in it until I had this paranormal event happen to me; where there was a mystery light.

EAM: Oh wow! Can you tell me more about that?

MS: My friend and I would go night hiking when I was 19 out in Ashville, New York – the middle of nowhere. So what we would do is point in a direction, hike a few miles, and set up camp wherever we wanted to. Once we had done this and gone underneath this draft horse fence, with barbed wire, on someone's property but you know to us it just looked like woods. In the distance, we saw a light, and [at first] I thought it was a person. But [the light] wasn't moving up and down like someone was running, it was moving side to side through the trees, and it stopped a short distance away from us. We went into this panic mode – but we couldn't move. It felt like I was melting, and [when] I came out of it, I guess there was some missing time; I smacked my friend and we started running. We ran as fast as we could but I forgot there was a draft horse fence. So the barbed wire went into my leg. I ripped it out. In panic mode, we each had a machete, to wack at the thicket, and I started hacking at the wire because I'm in panic mode with my adrenaline running. The barbed wire snapped, I went through the second [fence], my friend shot underneath it and the barbed wire hooked through his eyelid. We then ran all the way to the next town, and laid in a field until sunrise. It's weird when you think you know what the natural world is – and then you get turned upside down. When these anomalies happen for people who already believe it's easier, who enjoy folklore. When it happens to you as someone who is more unsure it's a life-changing event.

EAM: What in particular inspired you to start Mothboys podcast with Mike & Jake?

MS: In 2018 we attended a Mothman festival in West Virginia. The three of us started talking since all of us are huge nerds about cryptozoology, the unknown legends, etc. We said "We can totally do this. Let's start a podcast, and we can do it well." It's honestly crazy how we've become part of this community and how quickly we built a following. I'm proud of us. We have a lot of fun with it. A lot of podcasts like this are very serious, which is great- but what sets us apart is we are three huge goofballs. We're totally into the subject but we love goofing around with it hard. You can't take life too seriously.

EAM: What would you say has been some of the most rewarding or memorable experiences becoming a part of this community through the podcast?

MS: It has honestly been the most accepting community that I have been a part of. Everyone builds themselves and each other up. I've met so many amazing people, long-lasting friends. We've probably done 15 conventions. It's still so strange for all of us (Jake, Mike, and I) when people want to take pictures with us. I still think like "Are you sure?! You really want these three faces in a photograph with you?!" When people come up and share their stories with us, we love talking with people about this stuff! There's this energy. Everyone is there for this one thing and the energy is something else. Going to these conventions puts you in a different state of mind.

EAM: How has COVID affected Mothboys?

MS: The human interaction aspect of it. There's the conventions. I think it's changed the way we socialize. Our listeners are a huge part of Mothboys. We wouldn't be anything without them; We'd be three lunatics yelling into a microphone. We used to hang out with a bunch of other different people that we've met at conventions. Now it's reduced and so we have to find ways to escape it through social media – it's just kind of changed everything. We no longer record together because it's not safe to travel. I miss it, I miss it a lot. We have actually done one convention recently at the Flatwoods Monster Museum. It was socially distant, which was cool. Everyone stayed 6 feet apart. Everyone wore their masks. There was a steady flow of people, but there was not too much. Our friend Andrew, who runs the Flatwoods Monster Museum, did a really terrific job putting that together. We got to see a bunch of our friends we hadn't seen in awhile like Seth Breedlove, Liz of Keep on Creepin' On. We went down[to the convention] with our buddy Les and actually did a ghost hunt afterwards – which was f***ing crazy at this old hotel.

EAM: You've mentioned this to me before, can you go into detail about that?

MS: Yes! We went into this old hotel in Sutton, West Virginia. It was in really bad shape. It is actually a famous haunted building. Our friend Les brought this machine that scans through unused radio stations. Supposedly ghosts, or whatever you want to call them can speak through static. We asked questions and we heard voices. It stopped for a while and I stopped recording. There was an empty room behind where Les had set up. There was this foot that appeared. Like, a human foot. It looked like something I could just pick up and touch. It wasn't see-through. It wasn't shadowy, it wasn't smokey. A human foot- but nothing was connected to it. When I saw it I took a step back and whispered "Les. There's a foot right there." Then a [paranormal] investigator across the room stopped me and said "Don't move." The investigator had brought a camera that maps out everything in the room; and [on camera] a tall figure had appeared next to me. My eyes got watery, it was very intense. It was life-changing.

EAM: You've also done a convention where you spoke on an alien panel, can you go into depth on that story?

MS: So, this was at the Pennsylvania Conference of the Unexplained. Our friends Seth Breedlove and Mark Matzke were a part of this panel of prodigious paranormal investigators. Seth invited me up to speak on this panel and told me I had to make up a story about who I was. I went up there with these huge alien glasses on my face and I said that I was a Ph.D. candidate writing a book on spirituality and UFOS and it was called The Alien In Me. It was last minute, everyone else on the panel was just staring at me - the Small Town Monsters crew and I always cause a little trouble when we get together. People in the crowd were actually asking me questions. I had to come up with all these weird answers. I like to bring humor to everything. I'd really like to bring a conference like this to Erie sometime when circumstances are better.

EAM: In the most recent episode you mention that you won this crazy contest with Baby Ruth bars - how did that even come about?!

MS: Baby Ruth did this contest where you share a photo of you and your longest lasting friend.  I sent in a photo with my buddy Jeff. I tagged Baby Ruth and Sean Astin, and we won and I guess we won a year's worth of Baby Ruth bars. I don't even like Baby Ruth bars. And a letterman jacket with our faces embroidered on it, which is gonna be tight as f***. I'm so excited for that jacket. [laughs]

EAM: What a funny contest- I honestly thought it was fake at first.

MS: A lot of people did. It sounds fake. We will also get a video chat with Sean Astin (The Goonies, Lord of the Rings) later next week. So that'll be a lot of fun.

EAM: You and your brothers have pursued a few joint ventures together over the years, what do you like about working with your family?

MS: I trust them. Since they've known you for so long, [family] gets you. I've always been close with my siblings, we've stuck through a lot and have a strong bond. Jake is just like family; we have a dynamic and bounce off of each other. I wouldn't have done this podcast with anyone else. We started this [podcast] after the Mothman festival (2018) and it just picked up so fast. It can be hard for paranormal podcasts to get traction because it's so saturated. I like how people are becoming more intrigued by the unknown. There's mystery, and there needs to be more mystery in this world.

EAM: What would you tell somebody thinking about starting their own podcast?

MS: Do it and go full force. And don't get too serious with it. Make sure you're having fun with it. Yeah, just f***ing do it. Like Nike says, Just do it. You know?

This interview was edited for length & clarity. Follow Mothboys on Instagram, check out the podcast on Spotify.