At a venue named Erie Playhouse 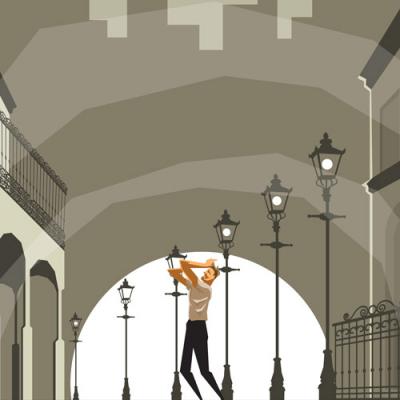 Unlike lead protagonist Blanche DuBois, Tennessee Williams' 1947 play A Streetcar Named Desire has faded little with age. The original production was shown 855 times between its Broadway opening and its close in 1949, receiving the Pulitzer Prize for drama in 1948 and standing ovations of up to half an hour along the way. This story of shocking, staggering decline still holds high esteem with critics and audiences, who regard it as one of theater's finest works of the 20th century.

The play and the subsequent Academy Award-winning 1951 film adaptation dealt with controversial topics such as sexual wantonness and impropriety, domestic violence, alcoholism, and mental illness. It was pivotal in opening the door to further dramatic treatment of these subjects, which had rarely been broached beforehand. Modern institutions such as the Lifetime Movie Network can be partially credited to (or blamed on) the work of Williams, a pioneering force in non-feel-good scriptwriting.

Streetcar begins when the ironically-named Blanche ("white," with the implication of being pure and clean), dispossessed of her family fortune and fleeing a sordid past, seeks the French Quarter with her (also ironically-named) younger sister Stella ("star," with the suggestion of being bright) and Stella's (unironically Polish) husband, Stanley Kowalski, in their cramped New Orleans hovel. Blanche's delusions and hollow gentility quickly wear on the brutish Stanley, who takes out his frustrations on both women. Stanley essentially ruins the fragile Blanche when he uses her checkered past (student-teacher affairs, prostitution, etc.) to drive a wedge between her and his poker buddy Mitch, for whom she develops a romantic interest.

In short: Shizz gets crazy. And not in a good way.

The Erie Playhouse production will feature Amanda Hurd as Blanche, with Brendan Daugherty (Stanley), Ellise Chase (Stella), and Michael Burns (Mitch). The play is artfully staged and rich in symbolism, with tension so thick you could cut it with a broken beer bottle. In the real world, Stella (or Blanche) doesn't always get her groove back. Art imitates life in this case. – Matt Swanseger