A Tip of the Iceberg: The Importance of Civil Rights Activism in Erie 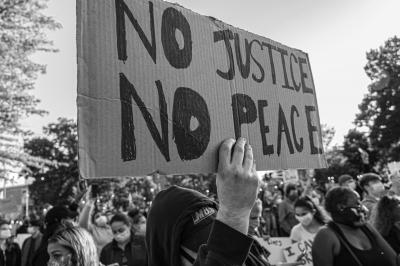 Erie has an intense and rich history of political activism. It's curious how many of Erie's younger residents are heard reiterating remarks like, "Nothing ever happens in Erie," or "Ha! That won't ever happen here – this is Erie!" However, from Erie's Underground Railroad locations, to The Gauge War, rumored Black Panther party presence, to the '67 Race Riots, and more prove that the impression of Erie couldn't be more wrong.

Names that have been frequently recurring while digging for information on prominent Erie-based civil rights activists include Erma G. Lindsay, Rosalie Karim, Bennie Wall, as well as Mildred and Howard Horton. Something that has been very interesting is the notable amount of difficulty one can experience when searching for information regarding Erie-based civil rights activists. While certain names have been accessible, older articles, obituaries, other various sources to be cited are extremely hard to locate – even though there are multiple testimonies.

If we look at contemporary active Erie civil rights activists, Andre and Gary Horton are two key mover and shakers that have pushed for changes over the course of their lives. Andre Horton is the first and only black politician to be elected to office in Erie's county government since its inception in 1803. Gary is the current president of Erie's NAACP. When asking Andre Horton what he wished Erie's younger demographic knew regarding the importance of being politically active, Horton stated: "It's always been young people. I was eight years old when I worked on my first campaign."

One discernible characteristic of many iconic civil rights movements as a whole, is that young people have historically always been at the forefront. Not just locally, but at a national level. Currently, people all across the nation are mourning the death of civil rights and political icon John Lewis. Lewis was around 17 years old the first time he marched alongside Dr. Martin Luther King Jr. Jesse Jackson was 19 when he participated in the 1960 Greenville Public library sit-in. Jackson was in his early 20's when he started working with Dr. King in the civil rights movement.

Horton went on to reflect on his involvement with Robert F. Kennedy's campaign at the age of eight, "I have fought these battles all my life. I started when I was eight years old, now I'm 60 but I am hopeful." Weighing in on the death of Felix Manus, who passed away in 2018 following an asthma attack that turned fatal due to delayed medical care, while in the county's custody: "Erie has its own 'I can't breathe' death."

Our conversation with Andre concluded with a particularly profound statement: "If watching George Floyd with a knee on his neck for over nine minutes from the comfort of your living room recliner doesn't enrage you enough to be active; probably nothing ever will."