A Welcome Wind of Change for Erie?

The dollars and sense of lakeshore wind power 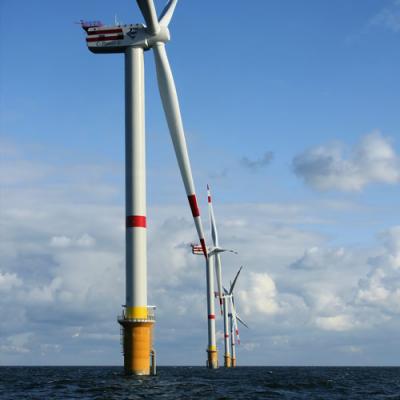 This summer there was some good economic news for Erie and all of northwestern Pennsylvania. A $40 million U.S. Department of Energy (DOE) award to Cleveland's Icebreaker offshore wind power project – which County Council has wisely partnered with Erie County – could mark the beginning of a new era for our region. These six wind turbines will create well-paying jobs and stimulate new port and industrial activity, and – as the name suggests – promise to break the ice for an expanded wind industry along Lake Erie.

Erie's shores are home to a terrific wind resource, both offshore and on. Wind power is a rapidly growing part of the U.S. energy mix, and for good reason: It's clean and plentiful, it creates good jobs with a future, and it is increasingly cost-competitive. The cost of onshore wind is already about the same as coal and gas for new projects, and offshore costs – while still higher – are falling rapidly. Growing concerns about the health and climate impacts of fossil fuels mean that regions blessed with wind resources, and proactive enough to harness them, are moving ahead.

What could this mean for us? Staging, assembly, and installation of big turbines employs people in logistics, transportation, construction trades; and for offshore projects, shipping and port operations. Beyond installation, smaller but still significant revenue streams from operation and maintenance continue. Supplies and services of many kinds are required, and the income thus generated multiplies as workers and businesses spend some of their wind-related earnings on other local goods and services.

In the water by 2018, Icebreaker's turbines can pave the way for many more here. DOE maps show that the best wind on Lake Erie is from the central to eastern shores, putting Erie right in the middle.

And the wind doesn't stop at the water's edge; an analysis by Pioneer Green Energy found a plentiful resource on the ridges of North East. All of this means that Erie County and its neighbors can be part of an important new industry.

How big could this be? Studies of onshore wind growth in Indiana and Illinois suggest that Pioneer's original North East plan could be expected to create about 1,000 jobs during construction, bringing $66 million in direct payroll with a total local impact of $114 million. Ongoing operations and maintenance could be expected to generate 50 jobs, almost $3 million in payroll with a total impact of $8 million annually, and $1.7 million yearly in local tax revenues plus $800,000 in land-lease payments.

What about offshore wind? A mere 1 percent of what the DOE estimates as Pennsylvania's Lake Erie wind capacity would mean installing 100 megawatts (MW). After all, there are shipping lanes, migratory bird flyways, and airport radar zones to be avoided. A recent study by the DOE's National Renewable Energy Lab suggests that constructing 100 MW of offshore wind capacity in Lake Erie would generate 700-2,500 jobs and $18-$315 million in total income. Post-installation, ongoing operations and maintenance would create 70-80 jobs and $13-$64 million in income yearly.

The wide ranges in these numbers point to a crucial dynamic: The more we and our neighboring states invest in Great Lakes wind power, the bigger the local bang we get for each dollar invested. Small pilot projects like Icebreaker only begin to create local resources needed to install and run wind power projects. But as the industry grows and encourages local capacity in specialized labor, transportation, and manufacturing, more pennies out of every dollar invested will be spent locally.

Where will the energy come from to power a growing nation and world? All large-scale energy sources have environmental impacts and public costs. But renewables like wind and solar are far cleaner and healthier.

Wind power subsidies are sometimes criticized. They are dwarfed by those given to oil and gas, but it's still an important question. Big new technologies – railroads, the internet – often need public support to get started. The question is whether there's an important public interest served and a good return on our investment. In rail and the internet, the answer was "yes!" And wind energy is no different. Onshore wind is now cheap enough to stand on its own, and its offshore cousin is making good progress.

What it boils down to is this: Where will the energy come from to power a growing nation and world? All large-scale energy sources have environmental impacts and public costs. But renewables like wind and solar are far cleaner and healthier, and it's no wonder that worldwide and at home they comprise a rapidly growing share of the overall energy mix.

In northwestern Pennsylvania, we are blessed with a rich wind resource. Why not be a part of the solution and reap the rewards?

Don Goldstein is Emeritus Professor of Economics at Allegheny College. His specialty is corporate adaptation to climate change and environmental management. He has served on the steering committee of the NW PA Industry Pollution Prevention Roundtable and currently works on local economic development. Contact him at dgoldste@allegheny.edu.