Love is in the air, and we're exploring Presque Isle's Wood Duck migration 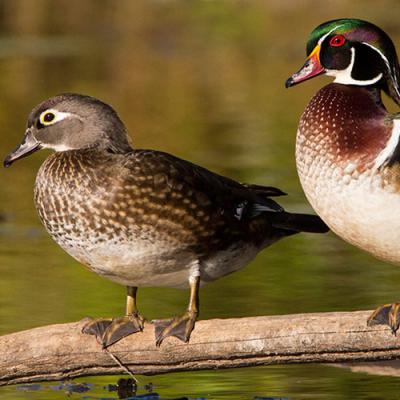 "In the spring a young man's fancy lightly turns to thoughts of love," wrote Tennyson. Maybe it's the imminent warmth or increasing daylight, but whatever the cause, hormones do start racing this time of year and soon males are pulling out all the stops in the hopes of finding agreeable females, hoping for a dance with them.

Prom? Nope. Birds. Courting males, of any species, are known for their outrageous, sometimes comic, courtship behavior, and birds are no exception to this rule.

March begins the great northern migration when birds leave their wintering ground in the south and return to the north to find their perfect mate and produce the next generation. Presque Isle State Park and the surrounding area will host these travelers, whether they are coming here to stay or moving on towards their summer homes farther north. Either way, the waters and woods in this area hold the promise of watching male birds vie for the attention of females. One of the most interesting and mind-bogglingly beautiful of these birds is the wood duck (their scientific name Aix sponsa means, roughly, "duck in bridal clothing"). Luckily for us, wood ducks come to Presque Isle for its many quiet lagoons and stay to nest, giving us a front-row seat to the life cycle of these amazing creatures.

The male wood duck's plumage is striking, with iridescent chestnut, blue, tan, and black areas set off by brilliant white borders. His eyes are red and his bill is orange white and black. He has a green and white crest that jauntily sweeps back. Though designed to catch a female's eye, those brilliant feathers at one time put wood ducks at risk. According to Jerry McWilliams, senior author, Birds of Pennsylvania, by the early twentieth century their numbers were in steep decline thanks to the clear-cutting of mature forests, market hunters, and the feather trade. Conservation efforts eventually restored their numbers and the population is now healthy, though they are still legally hunted and are sought after by fishermen who prize the yellow flank feathers for fly tying.

When looking to fill their dance cards, several male wood ducks will surround a prospective female, puffing out their chests, raising those crests and throwing back their heads with a hearty snap. Once a male has captured the attention of a potential mate, things heat up:

John James Audubon suggested in 1840 that we: "observe that fine drake, how gracefully he raises his head and curves his neck! As he bows before the object of his love, he raises for a moment his silken crest. His throat is swelled, and from it there issues a guttural sound, which to his beloved is as sweet as the song of the wood thrush to its gentle mate. The female, as if not unwilling to manifest the desire to please which she really feels, swims close by his side, now and then caresses him by touching his feathers with her bill, and shows displeasure toward any other of her sex that may come near. Soon the happy pair separate from the rest, repeat every now and then their caresses, and at length, having sealed the conjugal compact, fly off to the woods to search for a large woodpecker's hole."

Unlike many waterfowl, wood ducks do not nest on the ground, so the woodpecker hole Audubon mentions is one of the several choices for a nest site. Any hollow cavity, natural or created by other animals, is chosen, sometimes up to 200 feet above the ground. At Presque Isle and other human-managed natural areas, wood duck boxes are erected in wetlands, the birds' preferred habitat, to compensate for what nature may not provide.

The height serves the ducks well, as many typical predators cannot reach the nest. It does, however, create a challenging rite of passage for young wood ducks.

By late March or April at Presque Isle, the 10-12 eggs produced by a wood duck pair will have hatched into ducklings no bigger than four inches tip to tail with small wing stubs projecting awkwardly away from their bodies.

The day after they hatch, the female wood duck flies out of the nest, and starts calling. With little hesitation, each duckling climbs to the lip of the opening in the tree and courageously leaps, free falling to the ground. They belly flop into cold water or bounce on a (hopefully) soft forest floor. If their nest is 200 feet above the ground, that would be like a human infant jumping from a sixty-story building.

Remarkably, they are rarely harmed, and after a couple of good shakes, they waddle behind their mother to water, hop in, and start feeding themselves.

If you are at Presque Isle in the coming months, be sure to visit sites along the lagoons to look for male wood ducks displaying for the ladies or for small fuzzy projectiles falling from the sky.

Which is way better than prom.