About Town: The Kentucky Derby

With a few fun facts to consider when placing your bets. 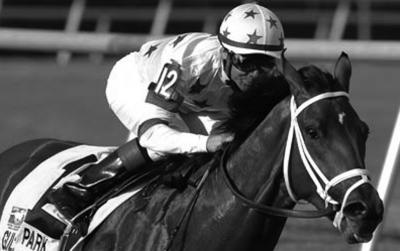 This week, 'About Town' heads out of town to one of the most prestigious races in the world. A race that most athletes should have to go through years of training and practice to have any shot at winning. Yet, these contenders don't have nearly as much time. They have about 2 years (required to be 3 years old to race) and have to run a mile and a quarter in under 2 minutes—which means their speeds are clocked in around 40-50 mph. In comparison, I'm lucky if I can run just a little over three miles in under 30 minutes. Actually, I'm lucky if I can run a little over three miles. Period.

If you haven't figured it out yet, what I'm talking about here is the Kentucky Derby—the first leg of the sought-after Triple Crown and my all-time favorite race of the entire year.

And guess what? It's this Saturday, May 5. Whether you're on the field or off, many of us will be placing our bets, drinking our mint juleps, and waiting for what is sure to be the most exciting 2 minutes in sports.

What I've gathered for you below, are my top five contenders for this race. I have studied these horses for weeks now, and while I've never before put my picks in print, I'm hoping to start a trend here and become one of the top-betting strategists in the world. Okay, that might be a bit extreme. Actually, I'm really just hoping I get one of these guys right and perhaps make a few bucks on race day. So, with that, here is the inside scoop on a few of these coveted contenders.

5. Creative Cause (for concern)

I believe this horse will finish strong, but not necessarily first or second (or third or fourth). Okay, so, I believe this horse will finish. I'm starting off with my least favorite,  but I'm still including him because I think one of my editors may appreciate him. He's a west coast runner hailing from California (and we don't see many of those guys in these parts). Here are my concerns though: He's only won once in the last four tries. He's a bit unfocused (oh, us creative types), and he's not wearing blinkers (blinders that prevent him from seeing behind or to the side) for this race, which is possibly the most distracting race ever. Still, he was a solid third in the Juvenile last year, a thoroughbred horse race for 2-year-old colts and geldings (castrated horses) that was held in Kentucky - and traveling that far as a two-year-old is a big challenge. And he also always finds a way to be close to the action at the finish line whether he wins or not.

For starters, Jockey Kent Desormeaux will be riding him. This is a guy who has three previous Derby wins and hopes to join Bill Shoemaker as one of the only jockeys to win the Derby four times. Dullahan himself was a solid fourth in the Juvenile, and he beat Hansen (the horse that came in first in the Juvenile) last time out in the Blue Grass. And he's what I like to call a "mudder" (okay, others will call him this too)—meaning he was bred to run on dirt. And since Churchill is a dirt track, no matter the weather, this one can handle it.

This horse has everything going for him—trainer Bob Baffert (widely recognized as one of the most successful trainers in the history of horse racing), an undefeated record, and has proven to be the fastest of his generation—so the distance isn't the issue. So, why do I have him in third place? Mainly because he hasn't raced as a two-year-old since his fledgling career has only lasted a couple of months. And the last winner of the Derby who made his racing debut as a 3 year old was in 1882. So, he'll be 'bucking' 130 years of history if he wins this one.

For the past three years, the winner of the Wood Memorial Stakes (one of five top grade races run as preps for the U.S. Triple Crown) has been among the favorites to win the Derby. And this year's no different. Gemologist took first place in the Memorial. Add to the fact that he's won all five of his career starts and is also 3-for-3 at Churchill Downs; so knowing the track will also be an asset. So, why don't I have him first? Because I believe in curses—at least when it comes to sports—and the Wood Memorial seems to have developed one recently.  Although the last three winners of the Wood Memorial Stakes have all been the favorites in the Derby, none of those horses actually made it to the race. They all suffered injuries before they even got there.

This pick throws everything out the window due to the fact that I've chosen this horse because of the jockey, Calvin Borel (betting strategists everywhere are in complete uproar). I just absolutely love this guy. Not in an "OMG, I think he's totally hot kind of way," but rather an endearing sort of way. There is no other jockey I'd rather see win on this day. When this guy wins (and he does, winning the Derby in 2007, 2009, and 2010), he is one of the most passionate, humble, and appreciative athletes I have ever seen. And there's something to be said for that in my book.  And the horse isn't all-bad either. Take Charge was sired by one of greatest champion stallions, A.P. Indy (A.P. was sired by Triple Crown winner Seattle Slew through mare Weekend Surprise, who herself was sired by another Triple Crown winner, Secretariat) So, his lineage is strong. And although A.P. has yet to breed a Derby winner, Take Charge Indy has a chance to change that.

So, with that being said, I believe this year's race is tougher than most; every horse brings something with him, whether it's history, lineage, or wins. Just keep a close eye on all of them in the days leading in. And even though I've given you my favorites, when all else fails, go for the long shots. The payout is higher and the underdog win is always far more exciting.  Good luck!

Fun facts to consider when placing your bets!

- Eight of the last 11 Kentucky Derby winners have come from the Raise A Native sire line. Here's a tip: The following horses that are slated to run in this year's derby, are thoroughbreds of this very line: Daddy Nose Best, Dullahan, Gemologist, Mark Valeski, and Liaison.

- The favorite—also known as chalks—only wins about 35 percent of the races.

- Only two geldings have won the Kentucky Derby since 1929 - Funny Cide and Mine That Bird.  Oh, and in case you didn't know—geldings are castrated animals.

- No horse has won the Kentucky Derby without running a race at 2 years old since the horse Apollo ran in 1882.

- Check out the derby horses' final prep races. The Kentucky Derby winner almost always finishes first, second, or third. As for how often? 95 percent of the time.

- D. Wayne Lukas is a horse trainer that has won the Kentucky Derby four times. And he has a horse in this year's race. Although the odds are currently at 22/1, this pony may be one worth spending a small wager on. The horse's name? Optimizer. (Just to keep this in perspective, he previously had a horse, Thunder Gulch, in 1995 whose odds were 25/1, and he annihilated the derby field that year.)

Useless fact – not all athletes that take performance-enhancing drugs are humans.

In the 137 times the Derby has taken place, there has been only one winner that was disqualified. It happened in 1968, and the name of the horse was Dancer's Image. After finishing first in the race with no bumping or jostling of any kind, he was disqualified by the stewards because a post-race urinalysis showed that the horse had been given the then-banned drug called phenylbutazone, which at the time was banned to race horses in the state of Kentucky.