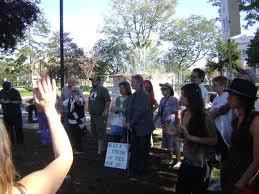 UPDATE 10/28/11: Apparently the city has not acceded to tents on the grassy area of Perry Square. Still awaiting comment from city officials.

In an interesting twist in the standoff between the city of Erie and OccupyErie protesters over the group's right to sleep in Perry Square and to hang tarps on the park's gazebo, the ACLU has stepped forward to represent OccupyErie, and the city has seemed to agree to allow protesters to erect and sleep in tents in the park's grassy area.

The ACLU sent a letter to the mayor's office today. The letter, which OccupyErie posted online (pdf), asked the city to permit protesters to sleep in the park overnight. From the letter:

We represent Occupy Erie, which has been holding a demonstration to bring attention to income inequality in Perry Square West, since October 15.  As part of the demonstration, a small number of people have been sleeping in the park.  On October 24, however, Erie Department of Public Works employee David Rocco informed the demonstrators that they would no longer be permitted to sleep in the park or to use tarps to stay warm. We are writing to ask you to allow the demonstrators to continue sleeping in the park overnight and to use sleeping bags, blankets, cushions, and tarps to staywarm given the cold nighttime temperatures.

The letter went on to describe the Occupy movement, and the cities where protesters and municipal officials came to an agreement about protesters' encampments. The ACLU has also offered OccupyErie legal representation. A representative from the organization is scheduled to meet with protesters next week.

According to protesters in Perry Square, a city police officer tonight approached the group and relayed permission from the city administration to set up and sleep in tents on the "grassy area" of Perry Square.  Tarps on the gazebo, apparently, are still prohibited.

Confirmation from the Erie city administration is still pending.

At the time of this report, there are no tents up at Perry Square.