How renaming is one way to recognize special Erie people

by Liz Allen
View ProfileFacebookTwitterRSS Feed
December 16, 2020 at 10:15 AM 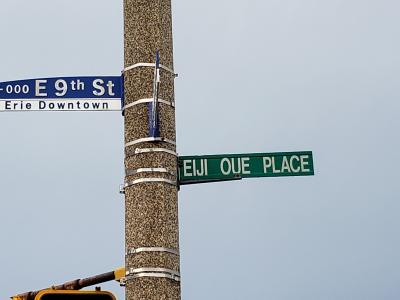 Liz Allen
The trend toward renaming parts of Erie streets to honor luminaries in the community began when Erie Mayor Joyce Savocchio decided to rename the corner of East Ninth and French streets after Eiji Oue, who served as music director of the Erie Philharmonic from 1990 to 1995.

When Evan Torres asked me in December 2019 if the city of Erie could rename a street to honor his friend, Phillip "Scotty" Askins Sr., an "asset to the community," I was flummoxed.

As a member of Erie City Council, I could uncover no rules about how to rename streets. Nor could I find a master list of renamed streets at City Hall. I also had questions. Should honorees be household names? Figures from Erie history? Did you have to be a long time Erieite to rate for a street name or did temporary residence count?

I remembered the brouhaha in 1995 when Erie Mayor Joyce Savocchio rechristened East Ninth and French streets as "Eiji Oue Way," to honor the charismatic conductor from Japan who led the Erie Philharmonic for five years before leaving Erie for the Minnesota Orchestra.

I recalled that some people were upset when City Council voted in 1998 to rename part of East 18th Street, between State to German, as "Erma Lindsey Boulevard," in honor of a noted local civil rights leader. Residents on East 18th Street feared that their mail would get mixed-up, but the new street name was honorary, not an official change for the U.S. Postal Service.

I knew that in 2012, the corner of East Third and French streets had belatedly been renamed "Harry T. Burleigh Way," to honor the famed African-American composer whose family homestead at 137 E. Third St. had been demolished without regard for the history it represented.

And I realized that in November 2018, I had joined my City Council colleagues to rename Poplar Street, between West 26th and West 29th streets, as "Florindo 'Flo' Fabrizio Way," in honor of the well-liked state legislator who had lost his battle with pancreatic cancer in July that year.

I'm guessing that a lot of Erie folks are familiar with the names I just cited, and my unofficial compilation of other honorary street names includes politicians and community leaders whose names you would easily recognize.

The late Phillip "Scotty" Askins Sr. may not be as well-known as some of them.

But his story is worth sharing, especially now, when we can all use a boost of inspiration to get us through the cold days of winter during a pandemic.

Torres was living in the 500 block of West Fifth Street when he got to know Askins and his wife, Joyce, who owned Farrell's Superette at the corner of West Fourth and Chestnut streets. "He ran the little mom-and-pop grocery store and I frequented the store for years," said Torres, who now lives on Erie's east side.

Scotty Askins had grown up across the street from the store, starting there as a stock boy at age 16 when it was a meat market, according to a 2016 Erie Times-News story.

But Askins had other jobs — including serving in the U.S. Army and working at Erie Malleable Iron — before he bought the store and operated it with his wife for 35 years, until they sold it in 2016 because of his illness.

By then, Askins was beloved in the neighborhood. "Everybody down there is family," Askins told the Times-News when he made the hard decision to sell.

Askins founded a ministry, His Shining Lights, which held a free Thanksgiving dinner every year at the nearby Martin Luther King Jr. Center. "He and his family members did that, with the help of his church," said Torres. "It ran like clockwork, because of the contacts he had." The dinner guests weren't just from the neighborhood, he said. "It was a fellowship of people within the city, anywhere in the city," he said. Church choirs sang. Fraternity groups set up and then tore down for the dinner. "He made it happen. He never forgot his neighbors and he took ownership of it," Torres said.

From January into the summer, Askins also organized monthly soup nights. He donated extra food to the daycare program at the MLK Center and to a low-income housing complex. He enlisted friends from small businesses, including Larry's Central Market, Serafin's Food Market, Dominick's restaurant and Tripifoods, for help with his food programs.

He organized a community garden. He put together Christmas parties at nursing homes. He sponsored a neighborhood barbeque.

At the store itself, he tended to his customers, said Torres. "He extended credit to the neighbors, his customers, he took care of them," Torres added.

When he became too ill to operate the store in 2016, neighbors spread the word that the market was for sale. When he sold his store in July 2016 to Binder Singh, Askins threw a free farewell Italian dinner for the neighborhood, at the MLK Center to say goodbye.

Torres likes the expression that "it takes a village" to help a community, but he also points out that one person can make a difference. "I think that is what I've learned from knowing him. It's true that it does take a village, but one person in that village can motivate everybody," he said.

In leading by example, Askins exemplified the character that makes Erie special, said Torres. "Erie is a rally town," he said. "When something happens, they rally around the underdog," he said, which is why he hopes others will rally to rename part of West Fourth and Chestnut streets after Askins.

In fact, Askins is the type of person that Erie Arts & Culture has in mind with its commitment to highlight the contributions of ordinary people to lifting Erie up. "We often imagine philanthropists to be those giving six-figure checks," said Patrick Fisher, executive director of Erie Arts & Culture. "We neglect to publicly celebrate those everyday individuals who get up every day not out of duty but out of passion." When someone like Scotty Askins organizes a free annual Thanksgiving dinner, that's an act done out of both passion and compassion, he said.

Torres certainly persuaded me that a street-corner bearing his name would be one way to honor Scotty Askins, who died on June 12, 2019.

And when that honor occurs, it won't be the first time that City Council has honored Askins. I learned this from his obituary: "His first service award was at the age of 17 by City Council, when he saved the life of a girl who was on fire."

Liz Allen wrote a column about "ordinary people" for 15 years at the Erie Times-News. You can reach her at lizallenerie@gmail.com.

Want to learn more about a diverse group of Erie people, often unheralded, who have made our community a better place?

Then visit Discovery Trail, the newest public art project by Erie Arts & Culture, in which Erie artists Jackie Quigley, Nick Warren, Scott Gladd, and Brigette Davitt have created 24 portraits and illustrations on vinyl wraps that have been installed on utility boxes along State Street, Parade Street and East 26th Street.

Don't just drive by the art. Get out and read the stories of these good souls, such as Bobby Sulecki, who is documenting the history of Erie's Polish community. His advice, on the utility box at East 11th and Parade streets, says: "Take pride in your neighborhood, take pride in who you are, take pride in what your background is, and never be ashamed of where you came from."

Here is an informal list of Erie streets that have been given honorary new names.

Bruce Baumann Way, Hess Avenue, from East 10th to East 12th streets. Baumann was a well-known supporter of softball programs and is an inductee into the Metropolitan Erie Sports Hall of Fame.

Eiji Oue Way, corner of East 9th and French streets. Oue, conductor laureate of the Osaka Philharmonic, was conductor of the Erie Philharmonic from 1990 to 1995.

John Vanco Way, East 5th Street between State and French Streets. Vanco served as director of the nearby Erie Art Museum for over 49 years.

Witherspoon Lane, East 19th between French and Holland streets. Witherspoon, a member of Erie City Council, is the founder of the Spoons Court basketball league, which plays on East 19th Street.