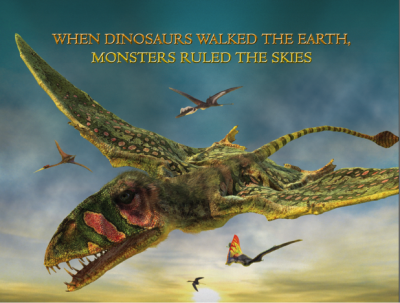 National Geographic, probably the most respected name in educational media—has brought a new prehistoric-based documentary titled "Flying Monsters" to Erie. The Big Screen Theatre inside the Tom Ridge Environmental Center (TREC) is where you can find this visually stunning CGI masterpiece.

Here's the Need-To-Know Info if you consider checking out the film.

Flying Monsters tells the story of the first non-insect animals to ever achieve flight on Earth, the pterosaurs. Some hundred million years ago, giant reptiles took to the sky and conquered the air. From fossils of these animals, the folks at National Geographic were able to get an idea of what these animals looked like and recreate them using computer animations.

Sir David Attenborough narrates the film and the same animators that are credited with creating the computer animations in "Harry Potter," "The Chronicles of Narnia," and "Avatar" created the CGI.

While those blockbuster movies speak to the quality of the CGI animators, Sir David Attenborough might be an unfamiliar name.  The world's leading naturalist, Attenborough has spent roughly 50 years broadcasting for BBC. He may be known best for narrating BBC's popular documentary, Planet Earth.

Here's My Take on the Flying Monsters.

I personally found this film to be enjoyable, and I know that can be difficult to say that about a lot of documentaries.

Educational films are often dry, as they usually just show black-and-white photographs on the screen with an occasional segment of a historian telling you how smart he is.

Since cameras won't be invented for another 100-or-so million years (and dinosaurs lack the physical and mental capacity to look into a lens and say "cheese"), there are obviously no photographs of these creatures.

Instead, Nat-Geo relies on beautiful animations to illustrate how these animals looked, hunted, and evolved over time. I couldn't help but be impressed how intuitive the CGI was to the viewer. It illustrated every last detail of the facts Attenborough was presenting. The CGI made it possible to actually see the facts and not just hear them like I would in most documentaries.

Speaking of Attenborough, he has an ideal voice to make an educational film interesting. His way of phrasing things, combined with his English accent makes you feel as if the guy just wakes up and goes on an adventure every day.  As the word's leading naturalist, he probably does.

My favorite part of the film was when Attenborough and a pilot took to the skies in a modern-day glider with a CGI animation of the quetzalcoatlus (biggest animal to have ever flown) flying next to them. This offered an entertaining aerial perspective of just how remarkably large this animal was. This was a creative way to demonstrate the features of the quetzalcoatlus.

Even if you have no interest in dinosaurs, "Flying Monsters" is an extraordinary display of both technological and scientific advancement that will only keep you in the theatre for a brief 40 minutes. It is definitely a film worth checking out. It's one thing to see a dry documentary with black-and-white photos on television, but seeing this visually epic film in the Big Green Screen Theatre is a much more exciting experience.

"Flying Monsters" will be shown every day at 12 p.m. and 4 p.m. at Tom Ridge Environmental Center.

This film is locally sponsored by the Friends of TREC.