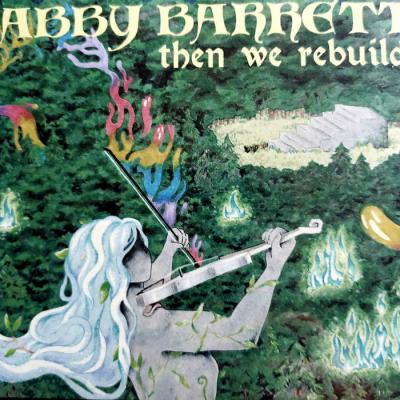 The debut solo EP from Erie musician Abby Barrett (Abigail Lynn) is both beautiful and haunting. Many are familiar with her work in The Mighty Sea, Potwhole, and various other collaborations. On Then We Rebuild, Barrett creates her own vision of what a solo album should be. She starts the EP off with two shorter songs, but once she has you hooked, you are on board for tracks that are up to eight minutes. The album highlights her multi-instrumental skills where she is not only the vocalist, but plays the violin, viola, cello, and guitar as well. She states that it is an album about love, consciousness, and chaos fueled by the old world ideology of Plato's Twin Flame. This duality is apparent in the way she changes from tracks like "The Trees Are On Fire" with its traditional song structure, to "2:42," an instrumental jazz-inspired track featuring saxophonist Joe Cieslak. The only other guest on the album was Andrew Todd, who played the organ and is also the executive producer of the EP. Then We Rebuild has crossover appeal from those who enjoy composers like Angelo Badalamenti and Jean-Michel Jarre to more modern songwriters like Cat Power.

Find Then We Rebuild at Bandcamp.com