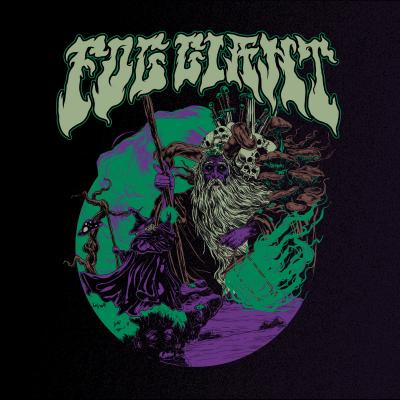 Do you like fuzzy, slow grooves that demand to be played loud? Like really loud? Fog Giant is your band then. A stellar example of doom metal hailing from Erie, PA, the quartet has released their debut EP, following their 2018 two-song (and 14 minute) demo. This record gives you everything you'd want from the band. It's a beefy EP to boot (with a gorgeous, black-light ready cover by MontDoom) — coming in at over 29 minutes, it might as well be a full-length album. Some of the best moments come when the riffs pick up, like during the midpoint of "Sesspool." The band is able to move as one lurching beast, occasionally going on a rampage or two. Vocalist Andrew Vickery's lyrics are richly dark and perfect for the genre, though the majority of the time is spent deep in riff paradise. Descended from the throne of Black Sabbath (note that Fog Giant also has a simultaneously titular and eponymous track at the record's center), the lineage of doom, sludge, and stoner metal is a storied one, with Fog Giant able to go toe-to-toe with just about any of their peers. — Nick Warren