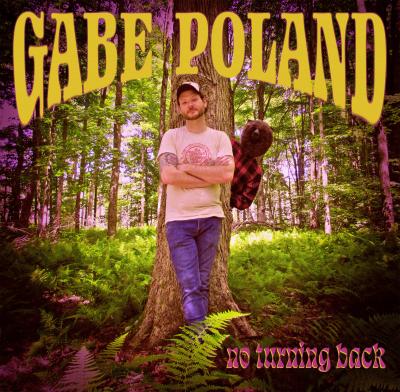 In his first solo album, local troubadour Gabe Poland (The New Morning Sunrise, East Clintwood) finds himself crafting a wonderfully weird folk album that's worth several attentive listens. There are more than a few moments that seem very Bob Dylan-inspired (like "King of Satisfaction" in all its "Subterranean Homesick Blues" glory), melded with the dark, morbid baritone of Johnny Cash. The ten-track album was written, performed, and recorded all by Poland himself, at his Burn Forever home studio. The tracks have a warm and intimate feeling that's perfectly in tune with the tone of the record. Crisp, acoustic chimes lathered in reverb showcased in tracks like "I Don't Want to Wake Up" provide a watery backdrop that pairs with Poland's slurred, hypnotizing vocals. Easily one of the most underrated artists in the Erie area, Poland proves once again that he has plenty to say, and he says it beautifully. There's a haunting feel in all of Poland's work, with No Turning Back dwelling on metaphors of death ("Dead Man") and inevitable change ("Seasons"), painting a gorgeous retro picture of an artist doing exactly what he's best at. — Nick Warren