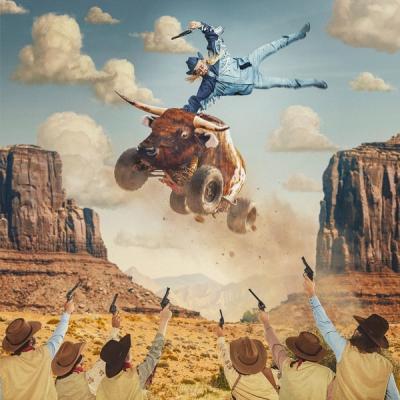 The world — or at least Oliver Tree fans — thought he was done. The songwriter turned meme announced his retirement before the release of "his first and last" album, Ugly is Beautiful, and it seemed like it might be better that way. The formulaic pop-punk tinged album was low on highlights and running on the fumes of the singer's viral fame. But who could expect him to stay gone for long? Oliver Tree returns with Cowboy Tears, a shockingly solid "country-emo" album that sounds more like a blend of '90s pop and modern indie rock.

Take "Cowboys Don't Cry," the album's lead single, or "Swing & a Miss," the single directly following it. Immediately, these songs feel different, more timeless than those that came before. The writing remains broad — "We're riding 'round this carousel if you catch my drift" — but in a way that makes the songs feel universal and relatable. Cowboy Tears is light, designed like a soundtrack to a sunny day, a combination of acoustic guitars and electronic drums that brings to mind Sugar Ray of all things. Although Tree's Tom Delonge-esque delivery can still be grating, there's nothing as outwardly challenging here as there was on Ugly is Beautiful. With any luck, Tree will continue to experiment with styles, considering his knack for melodies.