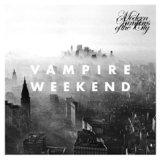 Given his past penchant for psych-rock flare-ups and the time spent shredding with fellow Californian Ty Segall, it would come as no surprise if Mikal Cronin's "MCII" featured non-stop torrents of fuzzed-out shredding. Instead, we're treated to a quieter affair that throws in moments of aggression in just the right spots. Over the course of the album, the 27-year-old Cronin showcases an array of sunny Californian power-pop tunes, each one carefully constructed for maximum effect. His restraint from simply stomping down on the fuzz pedal works to his advantage, making the ripping solo on "Am I Wrong" hit that much harder, while applying enough of a roughness to the excellent single "Shout it Out." Amid the flashes of guitar and occasional swirling strings, Cronin's vocals sound warm, yet vulnerable, complementing his well-crafted power-pop. A guitar-rager of an album would have been fun, but Cronin's restraint makes "MCII" even better. - Alex Bieler - 5 Stars

Modern Vampires of the City

Three albums in, Vampire Weekend still manage to sound as youthful as ever. Ever since the opening three notes of "Mansard Roof" welcomed the world into the foursome's brand of Ivy League-pop, Vampire Weekend has managed to charm fans with smart lyrics and a rich sound. Even as the band gets older – frontman Ezra Koenig is 29 – Vampire Weekend still sound as effortless as ever on "Modern Vampires of the City." The insanely catchy bopping of "Diane Young" (if Koenig's vocal take on the word "baby" doesn't get stuck in your head, I don't know what will) will appeal to those that love their Vampire Weekend fast and fun, whereas the Baroque-tinged pop of "Don't Lie" to those who like the band slower and more thoughtful. Yes, sometimes Koenig and company will get too cutesy with vocal processing, but "Modern Vampires of the City" is yet another impressive output by the high-class band. - Alex Bieler - 4 Stars

For those only familiar with "Halcyon Digest," Deerhunter's excellent 2010 release, "Monomania" might be a bit surprising. Of course, those that have followed the Atlanta band have come to expect Bradford Cox and company's stylistic shifts for some time now. The indie band has eschewed the dreaminess of "Halcyon Digest" and instead settled for something much rawer, a grittier rock sound that sounds like a different band than the one that created the stellar 2010 track "Helicopter." At first, the dirtier qualities of "Monomania" can be a bit jarring, but there are plenty of rewards behind the grime. From the fun country-swing of "Pensacola" to Cox's chants of "mono-monomania" during the title track's searing close, one can get used to this latest shift in Deerhunter's catalog. It doesn't quite reach the same level as "Halcyon Digest," but sure is a fun ride. - Alex Bieler - 4 Stars

"Ghost on Ghost" bursts open with the cacophonic percussion-based intro to "Buried in the Briars," which then gives way to a slinky-yet-funky 12-string guitar riff, which then crescendos into a burst of warm of horns only to be punctuated by Samuel Beam's vocals. The drums, guitar, and horns all splash in the background as Beam's voice takes to the front – much to be expected of any Iron & Wine work. A vibrant album-opened – closing with a whaling sax solo – "Briars" is the album's strongest point, even making an appearance in midway track "Sundown (Back in the Briars)." While this album features Beam's quintessential heart-on-the-sleeve attitude and feel, it meanders, getting lost with nonsensical ostinatos that distract from Beam's otherwise often sharp and touching observations. Songs like "Joy" – more common album-fare – are quiet yet delightful, but the sha-na-na-na-nas fall flat, seeming lazy and tired.  - Ben Speggen - 3.5 Stars