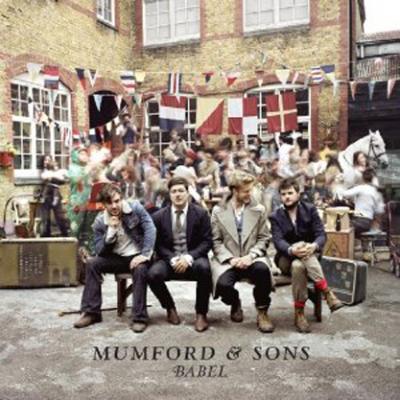 After their debut album "Sigh No More" was a smash hit, the English quartet Mumford & Sons have many publications' full attention for "Babel." The follow-up album is almost a continuation of their debut, with many of the same elements – the quickly-picked banjo, the stomp-worthy beat, frontman Marcus Mumford's howling vocals – popping up once again. While "Babel" isn't exactly a major departure from "Sigh No More," it still makes for a satisfying batch of religiously-themed tunes. The album-opening title track kicks the newest effort off with a good ol' banjo stomper, starting a trend of slightly more aggressive tunes. Lead single "I Will Wait" has the charm and hum-worthiness of "Little Lion Man," while "Broken Crown" is a haunting tune with a rousing climax. "Babel" may feel like a safe choice for Mumford & Sons, but they execute it well. - Alex Bieler 4/5

While a switch to a major label can makes fans worry that their favorite band might make a change for the worse, so far the results from Frightened Rabbit's time with Atlantic Records should allay the fears of some. "State Hospital," a five-song EP of tunes that the band felt didn't fit with an upcoming album but deserved more than b-side status proves that the Scottish glumness and rousing choruses that endeared the quintet to many is here to stay. The title track, the lone song that will be included on Frightened Rabbit's next album, is the highlight of the EP, with its slow-burning, almost cinematic chords culminating into the typically wonderful bit of Rabbit rock. Slightly atmospheric touches enhance the album, giving the EP a foggy landscape to go along with its tales of love and regret. A solid appetizer before Frightened Rabbit's next meal. - Alex Bieler 4/5

The Sound of the Life of the Mind

Although "The Sound of the Life of the Mind" marks the first album for Ben Folds Five since 1999, the band's unique style hasn't changed too much. Much like the album's cover of a contemplative robot deep in the ocean, the Ben Folds fronted trio maintains a sense of imagination and humor on the album, much like in the group's early albums and Folds's solo releases. Even in emotionally-bitter songs, like "Erase Me," Folds can still toss out a line like "Erase me/ Do me like a bro and tase me." Still, these songs feel more real than some of the subjects of Folds' past, and the music has an extra bit of power behind it, as well, although some of the songs aren't too memorable. "The Sound of the Life of the Mind" isn't a perfect album, but Folds fans should be pleased. - Alex Bieler 3.5/5

It's hard to not want to give Bob Dylan a five-star review, and if he recorded 60-minutes of silence, critics would herald it as bold, significant, and triumphant based solely on his catalogue and credibility. But Dylan's latest album deserves every star for two reasons: it's brilliant on its own accord and it punctuates his catalogue beautifully, capturing all of the essence that makes Dylan, well, The Man. The two strongest tracks close the album – the chorus-less "The Tempest," about the sinking of the Titanic that unfolds in 45 verses, and "Roll on, John," written for John Lennon and including some of Lennon's own lyrics including "I heard the news today, oh boy," which you can imagine Lennon harmonizing on. Dylan proves he's an endless source of great, thoughtful music, proving why he's regarded as he is. If this album punctuates his catalogue, hopefully it's not a period but only a comma. - Ben Speggen 5/5