For your listening pleasure, Fiona Apple, The Tallest Man On Earth, Smashing Pumpkins, and Neil Young and Crazyhorse all reviewed. 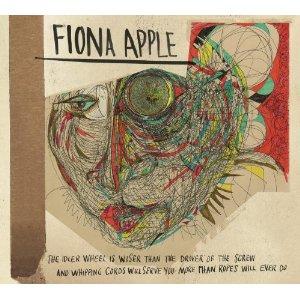 Fiona Apple
The Idler Wheel…
Epic
For some artists, a seven-year gap between albums can be a sign that we're going to see a new side of the performer. Luckily for us, Fiona Apple hasn't changed, at least not musically. On "The Idler Wheel is Wiser Than the Driver of the Screw and Whipping Cords Will Serve You More Than Ropes Will Ever Do," only her second-longest album title, Apple presents 10 tracks of unguarded honesty, presented with minor piano chords, sparse percussion, and found sounds. From the opening nursery-rhyme chimes of opener "Every Single Night," we see Apple's poetic admissions at work, turning what could easily be clumsily jumbled phrases into hypnotic lyrics with her powerful voice. "The Idler Wheel…" shifts effortlessly between pretty and unnerving, paranoid and hopeful, all at a blink of Apple's heavy-lidded eye. It may have taken seven years, but "The Idler Wheel…" is well worth the wait.
5/5

The Tallest Man On Earth
There's No Leaving Now
Dead Oceans
At the very least Kristian Mattson is consistent. After two full-length releases, as well as a pair of EPs, the Swedish singer/songwriter's latest effort under the moniker The Tallest Man On Earth is chockfull of Dylanesque tunes. On "There's No Leaving Now," Mattson does add in some more instrumentation than before, but the album is very much in the same vein as the pretty, intricately strummed folk of his prior works. With his nasal voice giving his impeccably picked songs a rougher edge, Mattson imbues songs like "1904" and "On Every Page" with a sense of intimacy. The biggest fault with "There's No Leaving Now" lies in that this isn't anything we have heard before, rarely mixing it up along its 10 tracks. Still, at least the album offers enough quality throughout to combat the lack of variety.
4/5

The Smashing Pumpkins
Oceania
Martha's Music
It's scary to think that The Smashing Pumpkins started 24 years ago. It seems like not long ago Billy Corgan was the king of alternative music, with golden tunes like "1979" dominating the ears of a generation. Now Corgan is all that's left from the original crew. Full of spite and contradiction, he keeps on churning out music under The Smashing Pumpkins, assembling a new lineup to do so. That being said, "Oceania" is the closest Corgan has been to his heyday in years. Towering guitars thrash throughout, the music constantly moves forward, all while Corgan's reedy vocals twist and turn around the beat. Still, it's all just a shadow of songs of past, like a diet version of "Mellon Collie and the Infinite Sadness." It's the best we've heard from Corgan in over a decade, but it's not nearly as memorable.
3/5

Neil Young and Crazyhorse
Americana
Reprise
While three-quarters of CSNY was helping Erie have its Best Summer Night, the other quarter was reuniting with another group. After 16 long years, Neil Young took to the bugle and called the band back together. Here's the catch: no new music. From "Oh Susannah" to "Jesus' Chariot" (NYaC's "She'll be Coming 'Round the Mountain"), it seems odd for thick, fuzz-laden guitars to be wailing through song sang by children's choirs, but the approach is entertaining. "This Land is Your Land" (actually featuring a children's choir!) stands out amongst the rest given the topic and the passion Young brings to it. Listeners are most likely hoping for a politically charged NYaC, and luckily for us, the time in the studio spurred Young to take to the songbook, which will hopefully be the album we're actually looking for.
3.5/5