All An Act Revisits The Middle Ages

All An Act Theatre stages A. R. Gurney's The Middle Ages again with the cast from the original 2006 production. 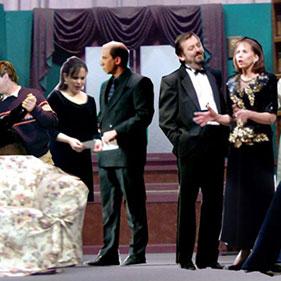 Talk about an encore presentation.

All An Act Theatre won't only stage A. R. Gurney's The Middle Ages again, but will also be using the exact same cast as its original 2006 production.

All An Act Theatre won't only stage A. R. Gurney's The Middle-Ages again, but will also be using the exact same cast as its original 2006 production.

"A3 was very small when we first produced the show in 2006," explained Ages director and actor David Mitchell via email. "We were too young a company to have really built an audience or a following, let alone have people come out in midwinter to see us. We knew we had a very special show and unfortunately, attendance was underwhelming.

"In 2013, we'd decided that for All An Act's 10-year anniversary in 2014, we'd take an audience survey, and see if there were any shows people had missed and would like to see us bring back," he added. "The Middle Ages was voted number four. Larry [Lewis, A3 managing director] and I agreed the interest validated its return. It just took us a couple of years to get there."

Amy Welker Rowe, who once again performs as Eleanor Gilbert, said via email that the play "is more about relationships. The relationships between parents and children and between two people who love each other, but never can seem to make it work."

Defining the show as a dramedy, Rowe concluded, "I hope that potential audience members will both laugh and cry and be able to see themselves in the characters we portray." – Gregory Greenleaf-Knepp