All My Sons to be Staged by All An Act Theatre

All My Sons is an extremely powerful story about post-WWII family and betrayal. 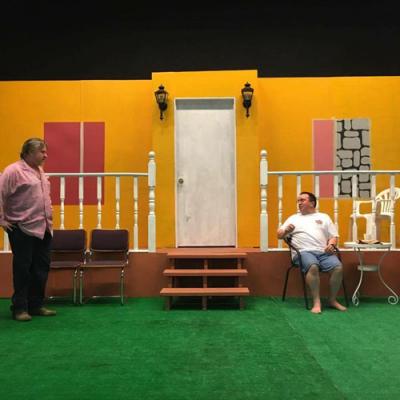 Sins of the fathers, money over human lives, and forbidden love are classic themes explored in Arthur Miller's play All My Sons (1947).

"All My Sons is an extremely powerful story about post-WWII family and betrayal," explained director Larry Lewis, who also performs in the show.

"All My Sons is an extremely powerful story about post-WWII family and betrayal," explained Sons director Larry Lewis, who also performs in the show, via email. "In much the same vein as Death of a Salesman (which we did in 2011), there is a family secret that ultimately results in tragedy."

Lewis plays the role of Joe Keller, "a man who was convicted of selling faulty cylinder heads to the Army Air Corps during WWII, which resulted in the deaths of 21 pilots. On appeal he gets exonerated, but his partner remains in prison. Joe goes on to great success."

I asked Lewis if directing and performing presents some complicated situations.

"Directing a show and performing in it does create some problems," Lewis confided. "Not only do you have to make sure you're prepared as an actor, you also have to be attentive to the rest of the cast and make sure blocking and character interpretation is what you want."

He continued, "Since I can't physically write notes for the cast while on stage, I have to try and remember what I wanted to tell them after rehearsals. If it's something I consider major, we'll stop and do it over. Other times, I'll send them an email that night or go over it the next day before we start."

Joshua Mizikowski, who plays Chris, commented via email: "I think that Erie can expect to see one of the best written plays of the last century whose themes on life, and what happens to those families that suffer loss during a war, are just as impactful today as they were in 1947." – Gregory Greenleaf-Knepp