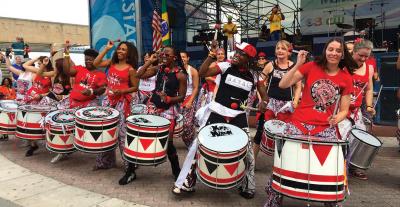 AmeriMasala organizer Lynn Johnson wishes people loved one another the way they love classifying one another. While baseball has long served its role as America's favorite pastime and soccer has captivated the rest of the civilized world, humanity has forever obsessed itself with categorization. In Biblical lore, it began with naming the animals. As cities were erected and the structure of the nation-state took hold, we began deepening and diversifying our methods for dividing ourselves. Soon enough, categories became hierarchies, strings by which "better" people could puppeteer "lesser" people to maintain their status.

As an African-American man who has encountered prejudice at several junctures in his professional and civilian life, Johnson has felt the tug and tension in those wires — and spoken out about it. He is an amiable personality, enthusiastic, engaging, and friendly — but he is certainly not naive. He compares combating racism to mowing the lawn; the longer we don't pay attention to it, the uglier it gets. And have things ever gotten ugly over the past few years as anger and outrage have overgrown the yard.

According to Johnson, we've become so wound up in race, class, in gender that we have trouble tracing the strings to where they started — at the top. We're like dogs that have wrapped ourselves around some vertical object, barking because we're feeling trapped, confused, and scared. But what if we could help one another unwind that lead and meet out in the open? And once we finally have that space to run free in, might it even be … fun? Once we're playing together, would it even matter that we were barking just a short while ago?

This is the mentality Johnson has sought to create with his AmeriMasala project, which he initiated in 1995 "to inspire a community philosophy which promotes the value and nobility of all people and encourages dialogue across the lines of race, ethnicity, gender, and class through accessible public presentations of the cultural arts, workshops and lectures." The AmeriMasala, which is a portmanteau of "American" and "masala" (blend of spices) is a "grassroots movement to counter hatred and confront racism and oppression."

The purest way of achieving that aim is through art. Imagination channeled outward leads us to create these artificial barriers; but by channeling it inward, by plumbing our depths, we can get at the essence of what makes us human — and that is the ability to express ourselves as individuals while simultaneously calling toward our collective spirit. Art is about more than one person; rather it is something shared by the community. Even if each individual reacts to it differently, it at the very least invites discourse. And that's a start if we are ever going to subvert something so entrenched as racism or sexism.

Johnson says we need to "unplug" our mainframes from running these tired scripts, to deprogram ourselves and create something new together. After a hiatus of 12 years, the AmeriMasala's UnoWE Parade represents the first steps to doing just that. The UnoWE Parade draws inspiration heavily from the Cleveland Museum of Art's Parade the Circle event, a nearly 30-year tradition in which Cleveland's University Circle is flooded with colorful costumes, wildly inventive floats, and towering giant puppets. All references to commercial, political, or religious affiliation are jettisoned — labels are not allowed because humanity is the brand. There are no motors because creativity is the engine.

The UnoWE Parade will begin at the Erie Art Museum and stop in Perry Square, where participants will be able to listen to musical styles from around the world, courtesy of One World Tribe, The Mulligans, Aka Jama Aka (Senegalese dance and drum group), and more. Headlining the festivities and joining the procession up State Street will be Batala New York, an all-female Afro-Brazilian samba reggae percussion band. No cosmopolitan congregation of this magnitude (there really is no other in Erie) would be complete without ethnic cuisines, and Johnson is hoping for an array that includes Thai, Mexican, Nepalese, Middle Eastern, and soul food in the park (he is still finalizing a few finer details as of press time).

Above any one food item, Johnson hopes that this event offers food for thought. Workshops to help newcomers craft the elaborate costumes and puppets seen in the parade are on the horizon for future iterations of the AmeriMasala, but for now he is hoping this reboot inspires creativity and sparks the desire for collaboration. In time, he envisions a self-sustaining phenomenon in which people of all backgrounds will want to get involved.

"I want a Black family run into a White family at the craft store and say 'Oh you're working on a giant puppet, too?!'"

And this time, it will be the individuals pulling the strings. — Matt Swanseger