"Alone on a Wide, Wide Sea": The Lighthouse is a Beautifully Ugly Experience 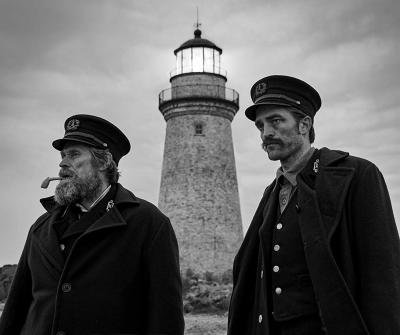 Robert Eggers hit the film world hard with his incredible debut The Witch, a film that was both a perfectly executed period drama as well as an utterly terrifying horror film. His follow-up film The Lighthouse delves into both those genres again, but it goes even deeper. The film is an exquisitely shot and wonderfully acted drama that combines backbreaking labor, sexual tension, surrealist imagery, and fart gags all into one near-perfect whole. If you're confused, this review probably won't make things any clearer.

The film centers on two lighthouse keepers (Robert Pattinson and Willem Dafoe at their career-best) as they go about their business on a remote New England island in the 1890s. As we follow these characters in their repetitive daily tasks, loneliness and paranoia begin to grip them. Soon secrets are revealed, a seagull is killed, and a storm begins hitting the island. When it is over, these two men will never be the same.

Shot in claustrophobically tight, black-and-white film that almost feels like a cross between Bela Tarr and Jim Jarmusch, the film feels tense and foreboding even before anything sinister happens. Like The Witch, Eggers uses pitch-perfect dialogue as well as period-accurate props and sets to draw the viewer into the film's world to the point that the characters' nightly routines almost become hypnotic. By the time the surreal horror comes near the end of the film, it almost threatens to cheapen the story. However, the incredible acting and confident direction make The Lighthouse a tense and entertaining experience all the way through. — Forest Taylor