An Accordion of Comedy: A Brian Regan Q & A 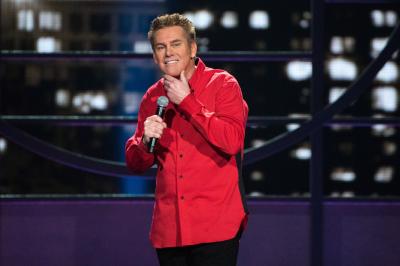 Brian Regan is a master comedian. Whether by personal observations or dog barks, he's able to cull authentic laughs from audiences all over the country. His upcoming appearance at the Warner Theatre on Thursday, Apr. 26 will mark his seventh time in Erie. We checked in with him to get some personal views on his craft and see what he's got in the works.

Nick Warren: It seems like you've gotten approval from 'alt' guys and 'road dogs' alike. They seem to appreciate the craftsmanship of the jokes you do. Do you think you're able to tap into the fundamentals of humor? Not to get too abstract immediately.

Brian Regan: That's what's always intriguing about comedy, there's the funny side of it, and there's the math and science side of it, which I do love talking about, but it feels weird talking about something that makes people laugh. I enjoy the craft of comedy. I enjoy coming up with an idea, and I enjoy trying to figure out the best words and the best beats to convey that as clearly as possible. It's a constant quest, because if you get it too lean and mean then you take the heart out of it, so you do have to have enough in there to give it reality. It's always a tightrope, you're always trying to find how much brevity to have involved, how much exposition. I consider it like playing an accordion, sometimes you feel like stretching your act out to get as much funny in there as possible, and sometimes you're squeezing it together and getting rid of all the fat.

NW: Working clean and working with general observations, it seems like you can make comedy out of virtually anything. Do you find that true?

BR: I think there's humor in everything. Not every comedian is going to find it in everything. I might look at something and say 'I don't see anything there' and then the next comedian will look at the same exact thing and say 'I just thought of five minutes of jokes.' That's what's fun about the world of comedy. Sometimes you'll hear another comedian do something and you'll think to yourself 'how did I not think that?' You'll tip your hat to these people because they found something there that I didn't. So the topics themselves to me are almost incidental. If you can make someone laugh about an awning on a building, that's just as cool as making someone laugh about politics.

NW: In the new special, you have bits where you use phrases like 'biddledee bum bumbawaybay.' Now — I tried to phonetically spell this out — but aside from 'schtee peepeedeedee peedeedee,' why did you name your newest special Nunchucks and Flamethrowers?

BR: That's a hard tee shirt for me to sell [laughs]. I don't even know how to spell out what my dad said growing up. Biddle eebaum bumba waybay.

NW: [laughs] There's just a certain ring to it.

BR: Yea. Bick bick bickadee bang. These are things my dad actually used to say, so I have them clearly in my head. I don't expect other people to say them as clearly as mine.

I was grappling with the title. The title for a while was I Don't Know What It Is. That was when I messed up a line in the special and then we used it as an outtake. I fumbled [saying] 'I don't know what it is' and said 'well that'll be a good title,' because it also is what life is all about. And then they said I Don't Know What It Is is too long, so we changed it to I Don't Know, and then I thought I don't want to undercut myself as a comedian. The role of a comedian is to see things and point them out, so if the title Is I Don't Know, then I'm not serving myself as a comedian. So I decided I didn't want that to be the title, and then they were like 'the show's going to go streaming in three minutes' [laughs]. I'm exaggerating, but I was on the clock. So I thought, 'what pops out here?' and I jotted down a number of punchlines, and I thought nunchucks and flamethrowers are weapons, and so you could — metaphorically and hopefully — add that as a connotation, like I'm doing comedy as weapons. It's a very tenuous reason [laughs], but it's something hopefully people would remember.

NW: Anything else coming up on the horizon?

BR: I'm doing The Tonight Show next week [scheduled to air Friday, Apr. 13]. I'm also on a TV series called Loudermilk. It's not my comedic vision, Peter Farrelly and Bobby Mort are the creators. He [Farrelly] saw me do stand up, asked if I wanted to be in this TV series and the next thing I knew, I was in it! It's a rare experience for someone in show business, where somebody has said something and followed up with it. [laughs] So, it's kind of a departure for me. It's me acting, and it's me in a role that isn't necessarily clean. The whole show is kind of gritty, and my character is kind of gritty. I'm proud of it. And if people want to see clean stuff, maybe they shouldn't watch, but if they're into good solid comedy, I recommend they check it out.

NW: Yea, you're somewhat of an anomaly. If you look at your IMDB credits, it's all 'Brian Regan as himself.' And then in Loudermilk you're playing 'Mugsy.'

BR: What's weird is that you have a lot of comedians who can be really down and dirty in their act, and then they do a voiceover in a wholesome Disney movie, while I do the opposite [laughs]. My act is completely clean, and then I was in Chris Rock's movie [Top 5], and now Loudermilk, and both of those are on the dirtier side of the track. So I guess I do everything opposite of everybody else.