An Anniversary of Agony: 50 Years Since Cleveland's Last Championship

It has officially been 50 years since a Cleveland major sports franchise has won a championship, a feat that hasn't happened since the Browns defeated the Baltimore Colts 27-0. 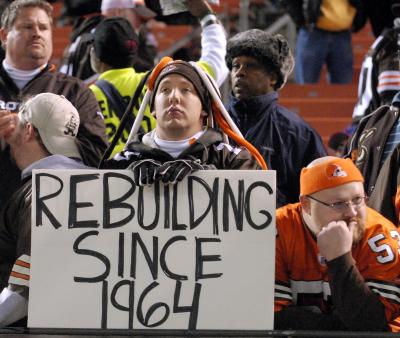 Fifty years. That's how long it has been since Cleveland last had the chance to celebrate a major sports championship, back when Gary Collins hauled in three touchdown passes and Jim Brown ran for 114 yards en route to a 27-0 Cleveland Browns victory over the Baltimore Colts on Dec. 27, 1964.

Since that special day, it's mostly been misery for Cleveland sports fans, including the melancholy bunch who live in Erie. If you keep up with the sports world, you've likely heard of some of the traumatic moments for Cleveland fans, including The Drive, The Fumble, Red Right 88, The Shot, The Move, The Decision (Don't expect a hyperlink to ESPN's awful TV special), and many more heartwrenching things that begin with "The." It's been a depressing half of a decade for the city and its fans, of which I (proudly?) say that I am one.

While the Chicago Cubs have the longest drought for any individual franchise in the "Big Four" (NFL, MLB, NBA, NHL) with the team's last championship in 1908, at least Chicago has been able to celebrate the Blackhawks winning the 2010 and 2013 Stanley Cups, as well as Michael Jordan and the Chicago Bulls dynasty in the '90s (once again, The Shot). Of every North American city with at least three Big Four franchises, Cleveland has the longest active drought.

The 50 years of failure have left may Cleveland fans rather bitter, leading to hilarious moments such as the time a Cleveland fan requested in his obituary that six Browns players act as his pallbearers so that the team could "let him down one more time," and Mike Polk, Jr's glorious rant dubbing Cleveland Browns Stadium (now First Energy Stadium) as "The Factory of Sadness" (slight NSFW warning for language).

Still, Cleveland fans remain loyal to a fault. I used to joke around that I wanted to see Cleveland win a major championship before my dad dies, but now I'm honestly concerned if I'll ever see one in my lifetime. For all of those Pittsburgh Penguins fans who have been grumbling that their team has only won one champioship during the Sidney Crosby era, cherish that title, because it could have been much worse. As for Cleveland fans, there's always next year.