An Essay of My Journey Through Faith During Troubled Times

While in-person services are suspended, J.D. Mizikowski looks back on some unlikely things that brought him back to church 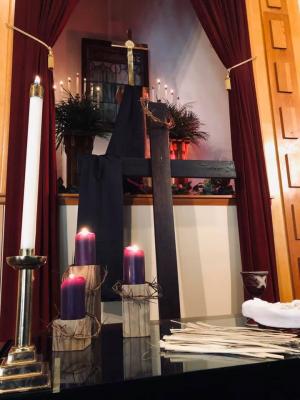 There is an inspired moment in The Simpsons Movie, where the town of Springfield thinks that the end times have arrived. With the end seemingly approaching, everyone in the church runs next door to the tavern, and everyone in the tavern runs over to the church. This moment – while giving some insight on how humanity deals with crisis – also makes us reflect on what do we turn to in these troubled times.

While the Simpson's scenario is not directly available, as both taverns and churches are closed (or at least should be), where do we turn to? While in the end it is my view that we all take the journey that we need to, I will recount my own, for both myself and anyone else who it may help.

I was raised in the Catholic tradition, baptized, and confirmed in the faith. I never in all my years of Sunday school, however, felt I belonged, I was often chastised for asking too many questions, for wanting to probe deeper to the very heavy concepts that were being presented to someone at a very young age. What it seemed to me is that I should fit the faith, rather than the faith fit me. I understand to some thinking the opposite is a radical idea, that we should find what beliefs conform to our own view, that have been forged from our own views and life experiences. The idea that what is mostly a hereditary belief system that is passed from generation to generation – often blindly – has always struck me as hollow. We can of course explain to our children what we believe and why, (Can most people even do this?), but give them freedom after a time to find their own way. For several years I considered myself closer to Jewish than anything. This view was more than a bit heathenistic. Really it was based on little more than the idea of not accepting Christ as the son of God with little to no knowledge about anything else, and zero adherence to any practices. As an afterthought, the idea of giving up bacon is not going to happen.

Eventually during most of my late 20's and early 30's I considered myself to be agnostic, open to the idea of something more, but feeling I needed a great deal more proof. I will also note during this period of my life I spent a lot of time quick to anger, slow to accepting others, and full of a lot of self-loathing. The last few years I have dealt with a great many personal crises, both with my family, and other aspects of my life. I never cursed God, never asked for help from a higher power. Everything including myself just sort of existed, going from day to day with very little meaning, unfulfilled.

I will also acknowledge that I personally struggle a great deal with depression and have more than once had suicidal thoughts. This is part of my life that has always been present but that I have done very little about.

Now it came to a point about a year and a half ago now. I had just gotten out of a very unhealthy relationship, which had caused me to go into a very deep depression. By chance, or perhaps, by fate I met Pastor Rich McCarty, eventually noting but, in no way pressuring about Community United Church in Erie. I had very little inclination to attend any type of service as I considered it a waste of time. On a Sunday a few weeks later, I was moping around I thought, well, why not stop in today? I did.

I won't say that for me that the event was life-changing right then and there. There was a difference, a shift let us say. After attending the service, I felt cleansed. I did not feel reborn, but I felt some of those normally heavy dark clouds had lifted a little. I began to attend regular services and found myself – while not saying that my beliefs had massively been altered – shifting to an understanding that benefitted me.

Do I believe in every word of the New and Old Testament? Absolutely not, but I now find a great deal of beauty there, that I had not before. I find messages – that while being thousands of years old – can still serve me today. I found a group of people that were indeed welcoming no matter what part of the journey of faith someone is on. I have continued to attend whenever able and participated in several functions. As I work to make myself a better person this has been one key aspect and I thank everyone involved.

Now we come to the heart of the matter, it is not difficult to find ourselves feeling lost right now, many of us have lost our jobs, are unable to see loved ones, and feel adrift or even desperate. That's okay, we should have those feelings, I also see people hoarding food, necessities, lashing out in anger, and having little to no sympathy for those that may be struggling. This I do not find acceptable, nor should anyone.

The one thing I have come to believe about faith now is that we should all have some, what kind doesn't matter.

You can believe in Jesus as your savior, follow the teachings of the Buddha, or believe that Muhammad was the final profit. The important thing is believing in – and, in some way, trying to serve – something greater than one's self.

Even if you do not have any belief in anything supernatural, believing in the wonders of the universe and protecting them, is a higher calling. So regardless if you look to God, we all need to take a moment to realize that while despair is understandable, the only way to for humanity to survive and prosper might be to look beyond ourselves and work in some way.

Take a walk in the woods, help your neighbor, help the environment, be there in some way for others, whatever you need to do find a few moments of peace to help reset yourself. I think one thing that can help us through all of this, is that no matter how big or small doing something, anything, to make the world a little bit better place. This is what being all in this together is truly about.  Take care of each other,

Community United Church will be holding services Online from their Facebook page on Friday and Sunday. More information can be found at Communityunited.church