An Interview with Poet David Baker

On reading voraciously, being yourself, and why good poems take time 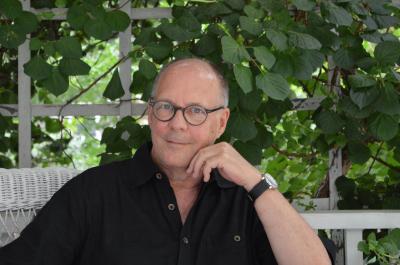 In anticipation of his upcoming reading at Penn State Behrend, I recently met with the poet David Baker via Zoom to discuss poetry, particularly the creative process. Baker's reading will take place on Thursday, October 13th, at 6 p.m. in the Metzgar Center. It is free and open to the public.

David Baker is the author of many books of poetry, recently Whale Fall (Norton, 2022), Swift: New and Selected Poems (2019), Scavenger Loop (2015), and Never-Ending Birds (2009), which won the Theodore Roethke Memorial Poetry Prize, as well as six books of prose about poetry. Among his awards are prizes and grants from the Guggenheim Foundation, NEA, Mellon Foundation, and Poetry Society of America. Baker's poetry and essays have appeared widely in periodicals, including American Poetry Review, The Atlantic, The Nation, The New York Times, The New Yorker, and Poetry. He lives in Granville, Ohio, and teaches at Denison University.

Theodore Wolf: Why do you write poetry specifically as opposed to other mediums? Are there any advantages poetry has that draw you in?

David Baker: It's purposeful. I do a lot of prose writing, but I write criticism and nonfiction about poetry. I write poetry because to my mind it's the most intense and musical of all the written arts. More happens in a smaller space in a poem. You can attend to the information or the story at hand, but you can also attend to the visual shape of the thing, and you can attend to the audible sound of the thing, the music of the thing. I was a musician for a long time, and I guess it's natural that I've turned to poetry because of its musical capabilities.

TW: In terms of inspiration, how do you find it, and if you have a hard time finding it, what do you do?

DB: I find inspiration for writing when I sit down to write. I expect myself to write. I write pretty regularly, not every day, not on a schedule, but it's what I do. I don't wait for the muse. I don't wait to be hit over the head with a big idea and then go write it down. It's part of a sustained habit of thinking and being attuned to a particular kind of intensity of language. Ideas come from everywhere. They come from walking around in the world. They come a lot from reading, not just other poems, but anything: the newspaper, magazines, natural history for me. I get a lot of ideas. I don't run out of ideas; it's not a problem of coming up with something to write. The struggle is always to make a thing really terrific, profound, and intense. That takes a lot of reworking. I do a lot more rewriting than I do writing. It's less inspiration than a kind of intentional and constant engagement with the thing.

TW: You spend most of your effort refining then?

DB: Refining or rewriting or starting over again or throwing a bunch of stuff out. Or adding another element to the poem. Building the thing. A poem never ends up the way it started. I've never written one in one draft or in a short amount of time. I like to take my time. I'm in no hurry at all to write an individual poem. You're trying to make something so well made that it won't fall apart; it will last a while. It's not a temporary thing. It's like a really wonderful meal instead of a potato chip that goes away in one bite.

TW: What effect do you want your poem to have on someone reading it?

DB: I want somebody to read a poem of mine and go, "Wow," and to say, "All right, I need to read that again." I want them to revisit the poem. I want them to live inside it, not just read it quickly and dispose of it. I want them to be fully engaged intellectually, emotionally, and in their own memory of things. I can't say I want them to be changed, but I want them to be really wrapped up in the thing. Emily Dickenson said she wanted the top of her head to blow up. I want [people to say]"Wow! That was amazing, that was incredible," or "I didn't quite know that in that way."

TW: We read one of your poems in class, "Patriotics," and I had that kind of response to it.

DB: That one goes way back. That's cool. That poem does a kind of thing that I've been interested in for decades. It tells a big story and a little story at the same time. That one's a poem about national identity and the weird celebration of the 4th of July, and there's a very particular grief in that poem that has to do with the death of that little girl. Here's the whole town showing up to have this big celebration and yet feeling really guilty or ashamed of this terrible thing that just happened. I like to write big and little scales at the same time and weave those together. The point is this: any moment in your life there's not just one thing happening. Right now you're talking to me, you're sleepy, you have to get ready for class. There's all this stuff happening, sometimes in the foreground, sometimes in the background, but all these things are working on you right now. It's interesting to me to compose a poem that allows these different levels of attention or engagement to happen at the same time or on top of each other.

TW: In terms of your overall trajectory as a poet, would you say you've evolved over the course of your career?

DB: I hope I've gotten better. I've been doing this for a long time. I'm still the same guy I was 40 or 50 years ago when I was starting to write poems and get engaged with the art. And I still have some of the same deep interests. I'm a Midwesterner, I write a lot about the outside, the natural world. I write a lot about the people close to me, my family, my neighbors, the village where I live. But I think I've changed in that the work may be more dense. It may be more layered or leveled. That's one thing. Another is I've moved away from a kind of linear storytelling or narrative. There's still a story in my poems, but there's an associative leaping around, too. I've changed in that way. I write little poems, I write big poems, I write plain ones, I write complicated ones. It may not even be for me to say what's changed or what's the same, but I think that density and more complicated music is something that's evolved over the course of the years.

TW: I imagine it would take a lot of time to develop this way of seeing poetry. Do you think a novice would intuitively be able to do it?

DB: Maybe not. It's a long, devoted process. I only try to think about one poem at a time. At any one time I'm working on two or three: one of them's about done, one's kinda done, and one's just ideas, but I'm really just trying to get that one poem finished or resolved or let it become what it's going to become without thinking, "Well, I want this one to do this, this, and this because that's what I do." Rather, I write a poem, and then I write another poem, and then I write another poem, and they become something in proximity to each other without my needing to overdetermine what that is. They tell me what they are. And I think more about one-at-a-time than I do the big scheme of things.

TW: What advice would you have for novice poets that may be intimidated by the medium?

DB: There's no reason to be intimidated, but I get that. One of the things to get rid of intimidation is to give yourself the okay not to compete with other people. There's no competition. Nobody's going to win anything. It's not about showing off. The only competition is between you and this ideal that you have for a beautiful poem, and you continue to try to write towards that. For advice, read everything. Read all the poems you can. Read the new ones, read the old ones, read the great masters from 300 or 600 years ago, read the Greek lyric poets, read the Romantics, read everything. Second is to be forgiving of yourself. It's okay to write a poem that doesn't quite end up right. A final bit of advice is to realize there's really no hurry. I see people try to write a poem every day. There's a thing called National Poetry Writing Month where people write a poem every day. And that just seems crazy to me. It's too hard to write a good one in a day. I want to tell them, "Write every day this month, but work on one poem all month, and work on it every day." Be patient and don't be in a big hurry. Try to get the poem really right.

TW: You would say reading lots of poetry is a very good thing for developing poetry then. Reading poems is a learning experience.

DB: Read lots of everything, but, yeah, you've got to read poetry to know what a poem is. If you were going to play classical oboe, you would want to listen to Mozart. You would want to learn all the different kinds of things the instrument can do. What's its register? What's it capable of? And you have to learn that same thing with poetry. What has it been? What can it be? I hear people say, "I wanna be a poet, but I don't wanna read other poets because it will ruin my originality." That's really BS, or laziness.