Samurai Pizza Cats are evolving beyond third wave cliches and finding their own recipe. 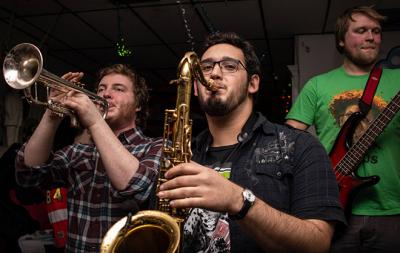 What does a Long Island ska band have in common with an early '90s anime farce? A name at least. What's that name? Why, Samurai Pizza Cats, of course. Perfect for fans of Big D and the Kids Table, Mustard Plug, or Spiritual Rez, this nine-piece band is sure to get the crowd skanking. A relatively pure synthesis of third wave ska ideals, Samurai Pizza Cats blend punk rock energy and excitement (not to mention a little distortion) with the literally upbeat nature of the genre, filled with tongue-in-cheek lyrics and catchy, anthemic horn lines. The band's newest single, "Paris" features a funky groove and  bold, brassy, almost Motown-esque backups. The vocals are immediately far grittier than any other previous release (paging all Streetlight Manifesto fans), and the track features a hypnotic, jazz-inspired saxophone solo. If "Paris" is any indication, the Pizza Cats are turning a new page, evolving beyond third wave cliches and finding their own recipe. — Nick Warren