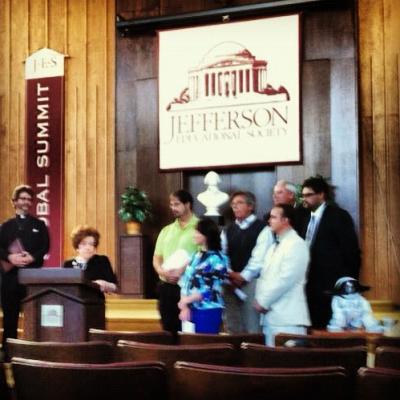 Oliver is a robot.

While he performed the Macarena at a press conference at the Jefferson Educational Society today, Oliver -- named after Commodore Oliver Hazard Perry -- will serve the primary function of helping to teach lessons to Erie second graders as part of the Perry 200 Commemoriation's "Erie History in the Classroom" project.

The "Erie History in the Classroom" project is just one of many initiatives underway thanks to the Perry 200 Commemoriation. After months of planning, the Perry 200 began its work in spring 2012 -- offering a series of free lectures, tours, performances, and events based around Commodore Oliver Hazard Perry, according to a handout at today's conference.

While many of us were taking as many pictures as possible of the beach, the sunsets, and downtown Erie coming alive, the Perry 200 was busy engaging the local community during its Launch Season. All told -- from the kickoff at Perry Elementary School in April to the historical lectures to free Army and Navy band concerts to the sold-out Crosby, Stills, and Nash Best Summer Night to the Independence Week events -- the Perry 200 Commemoriation "directly engaged almost 125,000 citizens while influencing countless more with active presences in print media, on the Internet, on radio, on television, and on billboards."

But as the sun begins to set on summer, the Perry 200 is only getting started.

According to the handout, "Thanks to the generous and unprecedented support of more than 60 prestigious community sponsors, a number of major events remain in the Perry 200 Commemoration's Launch Season – WQLN's Educational Celebration at the Blasco Library takes place Sept. 8, and the Governor's Arts Awards hits town for the very first time on Sept. 20. On Sept. 23, the Perry 200 Launch Season will culminate with the Community Sail and Memorial Tribute as the Niagara League, in conjunction with the Perry 200 Commemoration, will offer 60 lucky contest winners the chance to see history brought to life in the Community Sail.

"The Memorial Tribute will honor and commemorate not only the efforts of the builders of the fleet that built the future, but also the sacrifices made by those who served our country, our commonwealth, and our city, in some cases making the ultimate sacrifice in this, America's first forgotten war. A special flag presentation will be made to descendants of these heroes, who will then join members of the Naval Reserve Operations Unit of Erie in the floating of the flowers, a traditional maritime ceremony of remembrance."

But once that sun does set on summer and fall gives way to winter, the Perry 200 will be working as the Commemoration gears up for the 2013 Sailing Season, which promises to capture Erie's "proud past and bright future."