"And Then...": The Kitchen Sinks to New Lows in Filmmaking 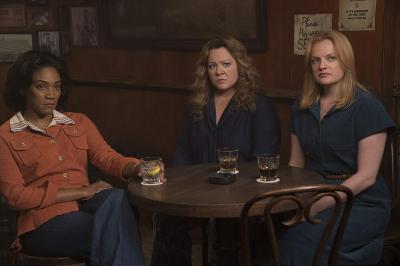 Trey Parker once said that the two most important words in storytelling are "therefore" and "but," meaning that every scene should segue nicely into the next scene, telling the story as it goes. If you don't have that, then you just have "and then" where things just happen without any real story progression whatsoever. Somebody should've told Andrea Berloff this rule before she made The Kitchen, one of the sloppiest and most bafflingly awful movie experiences in recent memory.

Set in Hell's Kitchen in 1978, the film follows three mob wives (Melissa McCarthy, Tiffany Haddish, and Elisabeth Moss) who find themselves in a dire situation after their husbands are sent to jail. These women must now get deeper into a life of crime in order to make ends meet and they soon realize that they can run a criminal empire as good as, if not better than, anyone else in the city.

This film is an editing nightmare, with a first act that goes by so fast it could compete in Daytona, characters that show up or disappear without any rhyme or reason, and a tone that varies so much it feels like three films playing at the same time. The jumbled and haphazard plot is only made worse thanks to a lifeless script and over-the-top performances, truly childish blocking, and some of the worst green-screen effects ever seen in a major motion picture. On one hand, I want to tell everyone to stay far, far away from The Kitchen, on the other hand, filmmaking this inept almost has to be seen to be believed. — Forest Taylor