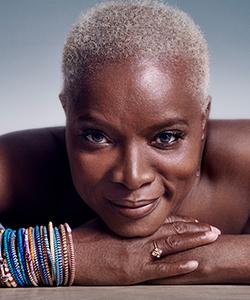 Beninese-American singer, activist, and humanitarian Angélique Kidjo has long inspired listeners to dance around their living rooms. All the while, she has urged them not to dance around the issues that inhibit quality of living.

Consider lack of education, for instance. In Kidjo's native Benin, a small country in West Africa formerly under French rule, literacy is among the lowest in the world. As recently as 2015, it was estimated that only about half of males and a quarter of females knew how to read. Growing up, Kidjo was told it wasn't a girl's place to read — or receive an education at all, for that matter. And to that she countered, "Batonga" — a word she invented to playfully express how very absurd that notion was. Decades later, The Batonga Foundation is empowering young Beninese women to supersede expectations and affect change in their lives and communities.

Kidjo knows it's possible because she's done it herself. Over a recording career that's spanned nearly 40 years, "Africa's premier diva" (according to TIME Magazine) has released 14 albums and been awarded four Grammys, most recently a "Best World Music Album" Grammy for 2019's CELIA, a tribute to Cuban singer Celia Cruz. Her 1991 album Logozo is ranked 37th on VICE Magazine's "100 Greatest Dance Albums of All Time" and topped the Billboard World Music charts that year. It's no surprise the polylingual singer (she's fluent in Fon, French, Yoruba, Gen, and English) embraces a world of musical languages as well — Afropop, Caribbean zouk, Congolese rumba, jazz, gospel, and Latin influences all share a welcome space in her sound.

Indeed, harmony is Kidjo's modus operandi. The Guardian named her one of the "100 Most Inspiring Women in the World" for her ability to uplift and bring people together around a message of equality and opportunity. She's been a UNICEF Goodwill Ambassador since 2002, traveling to Benin, Senegal, Ethiopia, Tanzania, Syria, Melawi, Uganda, Kenya, Sierra Leone, Zimbabwe, South Africa, and Haiti.  For her philanthropic work, she's been honored with Amnesty International's "Ambassador of Conscience Award," a Crystal Award from the World Economic Forum in Davos (awarded to "bridge-builders" around the globe), and a host of other distinctions.

On Sunday afternoon, Kidjo will seek to connect with the Erie community through a one-time virtual performance and discussion entitled "Artist at Activist: A Passion for Freedom and Social Justice," courtesy of the Mercyhurst Institute for Arts and Culture. In the one-hour program, she will touch on topics such as why artists should not hesitate to use their platform for social justice reform, the ways we can give back, and the tremendous amount of potential each one of us has to make an impact.

By the end of the show, maybe you'll be singing the same song.