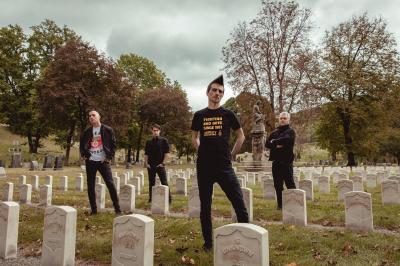 Josh Massie
Veteran punk rock band Anti-Flag will issue some grave warnings about the world's current sociopolitical landscape when they visit Basement Transmissions in anticipation of their upcoming album *20/20 Vision.

Hindsight is 20/20, as the saying goes. But this time 20/20 is something to look forward to. Pittsburgh's premiere punk powerhouse, Anti-Flag, return to Basement Transmissions armed with material from their upcoming record, 20/20 Vision, along with plenty of old favorites.

Anti-Flag has been one of the most popular and successful punk rock bands of the 21st century, and their politics have always been front and center, starting with their 1996 debut Die For the Government. On January 17, 2020, 20/20 Vision will mark the band's twelfth studio album, and their political views are still as much on their sleeve as when they began. The album cover features a distorted image of President Donald Trump crossed out behind the band's barbed wire "x" logo, and the music video for the single "Hate Conquers All" is openly critical of the divisive nature of Trump's policies, going as far as to use soundbites from Trump rallies and billboards advertising for a fictional Trump Tower: Moscow.

This tour in support of Anti-Flag's new album is also somewhat of a featurette of Pittsburgh-based punks on the band's record label, A-F Records, with The Code and The Homeless Gospel Choir touring as supporting acts. The Code is a ska-punk band with a long history of touring with Anti-Flag, and previous members from each band have spun off to create White Wives. The Homeless Gospel Choir has until now been a folk-punk solo act, but for the first time ever is performing as a full band on this tour. — Tommy Shannon