Erie's "Monster" Mark is master of the macabre 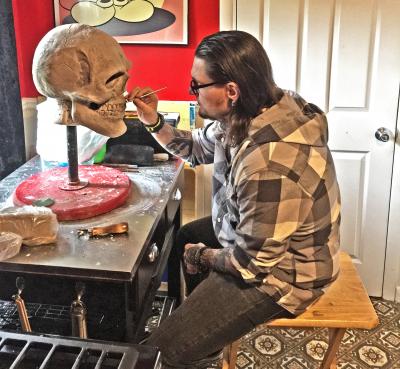 Come on in, make yourself at home! Blood's in the fridge and severed heads are on the table.

It's a gray October afternoon as special effects maven and macabre illustrator "Monster" Mark Kosobucki graciously invites me into his home studio (with not those exact words), just a plucked eyeball's throw from the Erie Cemetery. He's currently at work sculpting a giant skull helmet for an upcoming production — it looks nearly ready to roll out of a casket and onto Hell's red carpet, finely parted hairline fracture and surprisingly nice teeth. Mr. Link, Kosobucki's four-legged minion, wheezes excitedly for a pat on his fully-fleshed and intact head. The lovable mutt — half pit bull, half chihuahua (zero percent reanimated corpse) — is eager to take a walk amongst the living.

In contrast, Kosobucki's career path has long strolled alongside the moaning, groaning (un)dead, and he wouldn't have it any other way. Movies like Frankenstein and Ghostbusters and TV shows like The Munsters and Tales From the Crypt were early milestones in his development, while both superhero and horror comic books captivated his young imagination. As he names off his artistic influences — Todd McFarlane (inventor of Spider-Man archrival Venom and the anti-hero Spawn), Simon Bisley (Lobo), Dorian Cleavenger (Heavy Metal Magazine), Basil Gogos (Famous Monsters of Filmland), Ed Repka (often called the "King of Thrash Metal Art"), and especially Bernie Wrightson (Bernie Wrightson's Frankenstein, Swamp Thing) — he brims with youthful enthusiasm. There's a definite awe of and respect for those who came before him — a reverence, even if the artwork itself shades toward the irreverent.

Of course, Kosobucki is a talented artist in his own right, having designed album cover illustrations for the horrorcore rap duo Twiztid, horror-punk band Calabrese, synthwave group Dance With The Dead, and most recently Wednesday 13, the former frontman of Murderdolls (Necrophaze, released Sept. 27 on Nuclear Blast Records) — that's not to mention nearly every Halloween cover of the Erie Reader since its inception. His work was also recently included in The Devils Reign IV: All of Them Witches, a devilish compendium curated by Peter H. Gilmore, High Priest of the Church of Satan. Like a good acolyte, Kosobucki is constantly honing his craft, with hopes of making it into The Creeps Magazine (the spiritual successor to the Warren horror comic magazines of the 1970s) and Heavy Metal Magazine like many of his idols.

His first dalliance with special effects makeup was the seventh grade Halloween costume contest at Roosevelt Middle School in 1996, wherein he modeled a mock slashed throat wound. The mature Monster Mark, now a seasoned veteran in practical gore effects, called his prepubescent self's efforts "horrible." However, that year's showing and an eighth grade impersonation of WWE (then-WWF) wrestler Sting drew much attention and many compliments from his peers. If that got him thinking about a career, hearing about Tom Savini's Special Makeup Effects Program at Pittsburgh's Douglas Education Center sealed it. After completing his associate's degree there, he earned his B.A. in Applied Media Arts at Edinboro University, focusing on video production. "I got a much better feel for how sets work."

Context is critical in producing a convincing gore effect, so special effects coordinators are involved in both the staging and storyboarding of a scene. What is the hazard or conflict? Where is it coming from? And what is the (unfortunate) result? From there, Kosobucki will start constructing the gag, which might include prosthetics made from latex or silicone, bondo transfers (think grisly temporary tattoos), and fake blood or goo (Kosobucki favors a recipe of one part corn syrup to one part chocolate syrup — with food coloring and corn starch for added viscosity and opacity). As an added bonus, "it washes out nice," unlike other more chemical and less edible formulations. For gunshot wounds and sprayed blood, squibs (mini-explosions) are created from bike tire inflators, plastic tubing, and CO2 cartridges triggered by the actors.

Gore effects can and do get more complicated, but for the predominantly indie horror films Kosobucki works on, these methods often do the trick. The now-dormant Eerie Horror Fest proved instrumental in forging connections with directors Len Kabasinski and B. Harrison Smith, for whom he has done the bulk of his special effects and makeup work. He is credited on Kabasinski's Ninja: Prophecy of Death (2011), Skull Forest (2011), Blood Mercury (2014), Swamp Zombies 2 (2018), Challenge of Five Gauntlets (2018), and Hellcat's Revenge 2 (in post-production). He handled squibs and a hockey mask on Smith's Zombie Killers: Elephant's Graveyard and puppets for The Special, a "gory Twilight Zone-type movie" about a man who takes out his paranoia about his wife's infidelity on a box (subtly labeled "Stick it in here"), written by James Newman and Penn State Behrend professor Mark Steensland. Kosobucki said that finally producing their nightmarishly surreal script was a "pipe dream" a decade in the making, and he is palpably excited for a wider scale release (after it's done making the rounds at independent film festivals).

While you're waiting to check those out, Kosobucki encourages readers to literally fill in the space with a copy of his adult coloring book Scary Stuff I Couldn't Sell (But I'm Selling) on Amazon (which also carries his illustrated short story Brady). It features unpublished prints that were either shelved or turned down by clients, but were too ghoulishly good to be laid permanently to rest. After all, the best art never fully decomposes in our minds and hearts.

Matt Swanseger's brother, Casey, and Monster Mark spent a decent chunk of the '90s drawing comic books in one another's kitchens. You can contact the less visually talented brother at mswanseger@eriereader.com