Local talents reveal how they stayed strong and stayed creative 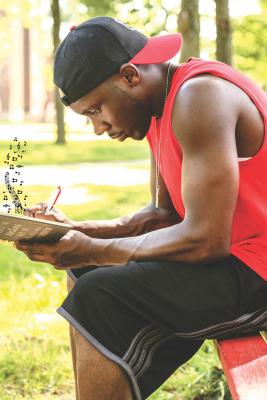 It goes without saying that 2020 hasn't been short on surprises, with COVID-19's rude awakening looming largest. With various shutdowns throughout the country issued by governors all over, businesses large and small have struggled to maintain their presence, and the people of America have been in disarray with quarantines, job losses, curfews, and other restrictions to control the spread of the virus. In the entertainment world, local artists who were actively playing venues and taverns had to reckon with a standstill due to the pandemic. The Erie music scene and its fans weren't quite prepared for such a crisis, and with live shows virtually eliminated, we're left with the question "What now?"

As 2021 approaches, fear and confusion have transformed into adaptation and adjustment for artists of all genres. Former Dirty Pickles frontman Matty B has made the stage his home base over the years, commanding audiences with an irresistible energy. Though the coronavirus had put a halt to his show bookings, the charismatic singer used his voice in another light.

"I wasn't a huge fan of playing on live streams because I just couldn't feel the same energy," Matty B admits. "So I came up with the idea of putting my personality to use by doing a live radio show (Distraction Radio Shuffle) featuring all of my friends and fellow local artists."

The digital world has been a benefit for many creatives including DJ and producer DJ Salt, who sees the break in his business as both a gift and a curse. "My business as being an entertainer was taken away with the snap of a finger," the beatmaker expresses. "In the meantime, it was a blessing to get society ready for the next level of the digital world. Thank God I've had Beatstars (a music-selling platform) and was able to still make a living on selling my production on my website and also have people come over to record."

Electronica instrumentalist Adam Holquist has also turned to the cyber world to keep things in rotation, collaborating with the Fazed Cookies man himself, Michael Bennet, for their Social Distancing Variety Hour special. Holquist says, "It started off pretty lighthearted and music-based, and then as living out in the world has gotten more serious, the show has too." Touching base with politicians, community leaders, and more, the duo has covered various topics to provoke thought and change.

Bassist Ralph Reitinger III, who is known for shredding with acts such as Eric Brewer and Jeff Fetterman, has been looking at the bright side of things while forging onward. "I mean what's crazy really is that the pandemic actually has helped me. I've been staying busy with gigs as much as you can during this whole situation."

Major Coins artist Aaron Rennel has been using the pandemic as an opportunity to grow as a musician. Rennel states, "I've just been doing a lot of self-work which helped to keep me in a space of productivity and growth throughout the pandemic." Another hip hop heavy hitter, Doc' Proto, states "I think this is a good time for artists to challenge their resourcefulness, and to find a way to enhance our creativity."

Optimism has settled in with the music community over the course of these trying times. Acoustic looper and songwriter Justin Moyar had seen his career reach new heights with touring, but with the virus hampering that momentum, the vocalist has been using the state of the world to challenge his lyricism for a new project. "I struggled writing things that had meaning to everyone at the time," Moyar confesses. "COVID changed that, and new songs like '95 Mask,' 'If I Were You,' and 'It's Only Paper' emerged."

Crown Boyz emcee Jyn 17 decided to stay true to his goals to further his journey. The rapper advises others to "remain humble. Take every day and every move you make seriously. Especially because of this pandemic, stay clean to keep the germs away. Write your goals down and check them off."

It's quite clear that many of us were caught off guard by this year and left questioning what our next move might be musically. But as in any situation where we are tested, we lean on grit and resolve to maneuver around and conquer the challenges. Kudos to our Erie musicians for pushing through and adjusting to provide us fans with their sound, voices, and showmanship that we all miss seeing up close and personal.

As the old saying goes, "The show must go on." And regardless of the current events that have been sweeping the world by storm, our artists here will not let the curtains close just yet.