Musicians refuse to have creativity shut down 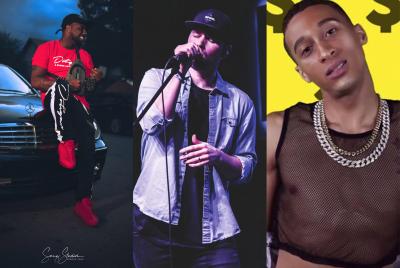 The year 2021 has felt like a fresh slate for some, and a continuation of the turmoil of 2020 for others. Although opportunity may seem scant, musicians are still striving to maintain a presence. Artists all over are learning to maneuver with the current status of our country and planet by releasing more tunes and visuals for your quarantine consumption. Locally, songwriters and instrumentalists of all genres are putting energy into their art to bring forth sounds for the new year. Here is a list of a few Erie composers that are sure to rock out during another trip around the sun.

The melodic hip-hop soloist has been climbing his way to the top of the Erie music scene by giving his audience and newcomers singles and videos nonstop for a little over a year. According to his rap ballad "Blame Me," Marley has been dreaming of being a rap star since he was seven years of age. Armed with straightforward lyrics of struggle and ambition, the crooning emcee has plans on delivering more raw material this year. "I have quite a few projects coming soon," the songwriter says. "Collabs with LottoBeats a.k.a Kahlil Husband on an EP. I also got videos dropping at least every month this year. I plan on making an album but just trying to build my fanbase more." The rap prodigy is looking forward to doing more live performances outside of the 814 but will continue to take everything in stride. Marley confesses "I plan on taking my music as far as it can go even if I don't make it as an artist, because I will make it doing something else musically."

The five members of this group have been blessing the ears of Erie with their professional-grade musicianship and harmonious interwoven vocals for some time now. Consisting of brothers Andy, Adam, and Alex Brown along with drummer Mike Wolfe and guitar extraordinaire Eric Brewer, Six Year Stretch is working on the follow-up to their 2018 album Afterglow. According to frontman Andy Brown, their third release will be one for the hearts. "Every song has a meaning or a story behind it," claims the singer. "Love, relationships, loss, and mental issues seem to be a lot of things COVID has affected this past year or so. We really tried to focus on the lyrics more with this one as well. We are shooting for an end of spring or beginning of summer release." Brown also states that the writing process has been great and that their upcoming installment will hit home. "We really believe in these songs and hope they connect with our fans like we think they will."

Six Year Stretch can be found on YouTube, Spotify, and Apple Music.

When it comes to self-love and sassiness without compromise, Majestic Mar is the epitome. Open about who he is while showing others that it's okay to be who you are, the gay male rapper refuses to set boundaries on his style while displaying his sexual orientation with pride and strength. His latest music video "Grim Reaper" featuring Finesse Fest (shot by Sanz Studios) showcases not only his individuality but his love for shock value through his personality. "For an artist like myself, I contribute diversity and confidence," Mar says. "Being able to share my truth in hopes that someone struggling out there gets it." The no-holds-barred emcee is currently in the studio cooking up more for the city and beyond its limits. "I'm planning a few surprises that are my most ambitious I've done so far. This is the beginning of a new era, change is taking place, and it cannot be stopped."

Majestic Mar can also be found on Youtube, Spotify, and Apple Music.