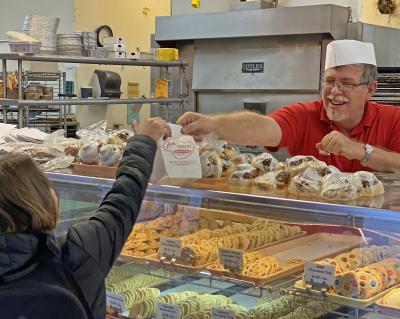 Jessica Hunter
Gordon Evans, proprietor of Art's Bakery, took over his father's successful and long-lived Millcreek business in 1989. In those 30 years, he has rebuilt and renovated the building at the original site and opened a satellite location on the east side, located in the New Central Market with Urbaniak Brothers meats.

When Arthur Evans opened his grocery store in 1950, West Millcreek was predominantly pasture. The cows have since vacated the area, but the family business remains. It's too bad they couldn't hang around; although nowadays they'd have difficulty keeping up with the cookies.

"Ten thousand cookies was our biggest day ever," recalls Gordon Evans, who purchased the store from his father in 1989. That's a lot of pressure for any heifer — but Santa needs something to wash all those down with.

Numbers like these are why the original business name "Art's Grocery" today only exists on tax forms and legal documents. Although features like the deli and cold case survive within the building, they're more or less vestigial structures — the proverbial wisdom teeth and appendix of the rechristened Art's Bakery. Without a doubt, baked goods are Art's bread and butter — and the reason it continues to thrive despite the drastic changes to the landscape around it.

Suburbia begot supermarkets and convenience stores, and come the 1970s, mom-and-pop grocers were suddenly fish out of water. An evolving bakery gave Art's the legs to walk the strange new landscape. As a young man, the junior Evans made sure of that. "My passion is baking and I emphasize it."

He apprenticed himself to a baker in Girard in 1976, essentially working for free. "I was taught things I couldn't have learned in a classroom," asserts Evans. "Other bakers have helped to some degree. It's a camaraderie thing." It seems he was an attentive understudy, as he has parlayed their collective wisdom into what's been voted Erie's Best Bakery every year since the Erie Reader's Best of Erie Awards were instituted in 2014.

Fundamentally, baking is about chemistry and consistency. Art's Bakery follows suit accordingly. Ingredients (reactants) are carefully balanced and processes (catalysts of the reaction) are tightly controlled so the resulting products are the same each time. Employees who yield the most favorable reactions are encouraged to repeat them. During my visit, one employee whips up towers of meringue (a notoriously fickle substance) so majestically tall they might rival Babel.

But at the end of the day, everyone's speaking virtually the same language, as they have from the beginning. "Most of what we do hasn't changed in 50 years," explains Evans. "A lot of the industry has become more mechanized; what we do is not too different than what you'd make at home. It's all scale." Everything's still made from scratch, just in an 60- or 80-quart stand mixer instead of one that'd fit neatly on your kitchen countertop.

Everything at Art's Bakery encompasses a greater and more unique variety than you'd typically find elsewhere — one great example is its pies. Everyone from Eat'n Park to Walmart does apple and pumpkin; but rhubarb, raisin, and elderberry? While not true throwbacks given pie-making's long, lavish, and latticed past — anyone remember the "animated pies" of the Middle Ages (containing a given feast's live entertainment) or the turducken-esque delicacy favored by Germany's Emperor William I in the 1800s? — there is an appealing quaintness to them nonetheless. Elderberry in particular is a popular choice, especially during the summer months when it is a best-seller. After tasting the handheld version (the elderberry "flip") with its buttery shell and subtly sweet-tart filling, I'm inclined to side with public sentiment.

For those of you baking at home this holiday season, Evans shares this tip: "Don't overmix the dough — a little flour should still be visible." Of course, when applicable, fresh or fresh-frozen fruit creates the most flavorful filling.

For those of you who would rather defer to the experts — and there are many of you — Evans advises against procrastinating when submitting your yuletide orders. A typical holiday cookie tray includes four dozen cookies (12 varieties times four of each) — multiply that a hundredfold and that's a lot of sheets to go through. Evans never wants to turn business down, but will not sacrifice quality for quantity. With the holiday season more compressed than usual this year (due to a late Thanksgiving), you might want to think about picking up the phone and calling now rather than hope you'll wedge yourself down a chimney and find them there just waiting for you.

Not that Art's cookies aren't worth contorting yourself for. Their traditional drop cookies, such as oatmeal raisin or chocolate chip, are invariably blessed with a thin layer of outer crunch giving way to a delightfully chewy center, just the way Evans (and much of Erie) likes them. And don't forget about Art's sweetbreads, sweet rolls, pies, brownies, scones, and cakes — on second thought, maybe you ought to forgo the idea of dropping into a fireplace anytime soon.

Baked goods are Matt Swanseger's kryptonite. He promises to make an earnest effort to limit both high glycemic index foods and unread emails at mswanseger@eriereader.com