Arts on the Chopping Block 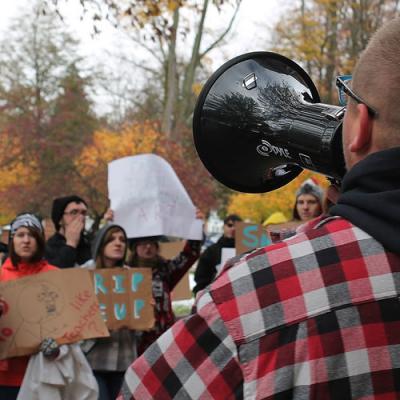 A full-bodied first snow was falling as I walked the short couple of blocks from home down to Edinboro University of Pennsylvania's campus to check out some students on the march a couple of weeks back.

I'd heard they were planning to hoof it from one end of campus to the other over a four-hour stretch on Oct. 24, stopping at major university arteries in between to rally against the EUP administration's plans to implement cuts in faculty and academic programs to help plug up a multi-million-dollar budget deficit.

At first, though, that older, downtown-facing corner of the campus was all quiet, all pretty scenes and soft footsteps and fat snowflakes. My only signal that something beside the familiar Edinboro winter may have been in the air down there, in fact, were four small words I saw in passing – "Art Will Save Us" – scrawled on a metal building support with what looked to be art-supply charcoal.

That, I thought, had something of the mood of a protest, some vague whisper of it, anyway. But, damn, it looked like I just might have missed catching what some of these students have to say on the actual matter at hand, and what they're actually doing about it.

I walked on into campus anyway, hoping I yet may catch a crowd, kind of brain-browsing over the facts as I understood them.

Currently standing at around $6.5 million out of a total yearly operating budget of about $95 million, the hole in funding, according to university officials, is a reality resulting from a couple of major factors: The nearly 20 percent hit in governor-approved state funding EUP and the 13 other Pennsylvania State System of Higher Education universities took a couple of years back; and, along with that, continuing drops in enrollment tied to population decline, and related drops in high school graduate numbers throughout northwestern Pennsylvania and elsewhere.

In short, the kind of problems, brought on by a weak and struggling economy, being faced these days by Pennsylvania's whole system of public, state-owned higher learning institutions – and a hell of a lot of other institutions, learning or otherwise, around the region and state.

Under an EUP workforce draft plan released in September following budget discussions started earlier this year, the university originally proposed eliminating its degree programs in philosophy; world languages and cultures; music and music education; and German studies – thereby discontinuing the majors following the end of this academic year. Along with that plan came proposed cuts of more than 50 employees, including 42 faculty positions filled by tenured, tenure-tracked, and part-time professors in the affected fields.

Shortly after that announcement, students and faculty in those – and other – majors and programs, began issuing a rally-cry against that plan, organizing demonstrations, writing letters and gathering signatures for a petition to university President Julie Wollman, among other efforts. Meanwhile, talks between university administrators and the faculty and its union continued or commenced, and, by late October, EUP's leaders made a couple more big announcements: Its music and music education majors, while getting programs reduced, are no longer fully on the chopping block; and plans for faculty position cuts, while still on the table, have been reduced down from the originally-proposed 42 to about 32, six of which are tenured or tenure-tracked faculty in the school's College of Arts, Humanities, and Social Sciences.

He explained that out of the university's 7,000-plus student body, the degree programs still planned to be eliminated – philosophy, German, and world languages and cultures – have a total of 28 students majoring. With the proposals to cut the programs following those students' graduations, "we're not undervaluing the humanities," Hileman said. "They're important subjects, [but] we just don't have demand for majors in those areas."

Still, even though it's a drop when pictured in the larger pool, that group of students standing up for their teachers and studies have made it clear they take major issue with the plan, and demand to be heard by those at its helm.

Which takes us back to my little walk on campus a couple of weeks back.

Having found all to be still quiet, I walked on, making a quick-stepped trip across EUP and finding my way to a good, hot coffee. Then, getting back to about where I'd started on campus, I started hearing voices, loud and clear, coming from directly in front of the steps outside the university president's office. There, I found about 30 or so bundled-up beings, most with signs bearing +++statements like "Goodbye Excellence;" "Save Our Staff;" "Is Music Really Safe?"

As far as he sees it, said environmental biology major Chris Danowski, cuts to faculty and academic programs represent what could be "the start of a death spiral" for educational quality within the state system. "I've spent thousands and thousands and thousands of dollars to get what I thought was a quality education," he said, but "when I leave here, what is my degree going to be worth?"

The group's stop at Reeder Hall was the last on that day's planned rally route. With 1,200 signed petitions at the ready, its organizers stepped inside, joined by many who'd been outside, ready to hand-deliver the bulky stack to President Wollman.

When one of her staff members came into the lobby and politely said Wollman wasn't immediately available, the students politely said they'd wait. Until she came out, they did, and a march on campus became an off-the-cuff sit-in.

Time for this guy, however, was running short, so I snapped a few more photos, talked briefly with a couple more people, and headed out, figuring I'd catch up on what happened a little later. And I didn't have to wait long – by 5:15 that afternoon, the Pittsburgh Post-Gazette had picked up on news of the sit-in and posted a related story on its website.

According to that Oct. 24 report, Wollman – whose assistants said had been in a pre-scheduled meeting when the group arrived – did come out of her office after about an hour. Wollman reportedly took some questions from the group, giving responses indicating that EUP has been looking at avenues across the board – not just in faculty and academic programs – for cutting its budget deficit.

With the petition hand-delivered and their impromptu meeting with the president done after about a half-hour, the group reportedly dispersed, nice and quiet-like. But it seemed pretty clear they let Wollman know they'll be asking more questions. And when it comes to the ways students, faculty and alumni have been rallying up and speaking out against any proposed cuts to faculty, more of the same can be expected as long as those plans remain in effect.

"The university has been very supportive of the students' rights to speak out," said Hileman. Among other efforts, "their voices helped save the music program" at EUP, and "they have great questions."

"I'm very proud of what [those students] are doing – and glad for it," sociology professor Lee Williams told me while we stood for a short chat outside of Reeder during the recent sit-in.

All in all, Williams added, "I think it's some of the most valuable learning they may glean from their educations."