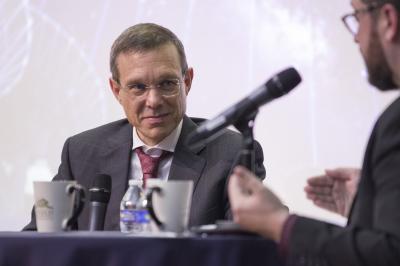 Check your egos at the black hole, folks. Turns out we're not so special.

Take it from a leading astrophysicist and cosmologist. Abraham "Avi" Loeb, the chair of the Harvard Astronomy Department, founding director of its Black Hole Initiative, and director of its Institute for Theory and Computation recently spoke at Penn State Behrend as part of the Jefferson Educational Society's Global Summit XI. The focal point of his discussion, naturally, was the eternal question — "Are humans alone in the universe?" With refreshing candor and wit, the Israeli-born scientist served the audience a hearty slice of humble pie — and they graciously sucked up every last morsel.

Although Loeb is not especially convinced there is intelligent life on Earth (joking that the headlines in the morning paper are proof enough of that), he is positive it exists elsewhere. After all, how could it not? Of the (lowball) estimated 1 septillion stars in the universe (i.e. one with a trailing entourage of 24 zeros — indeed an astronomical figure), one-fifth host a planet in the so-called "Goldilocks zone" — where conditions are ripe for the atmosphere and liquid water necessary to cultivate life. That means there are more potentially habitable exoplanets (planets outside our solar system) than there are grains of sand on all the beaches of Earth combined.

Once we leave our cloistered little cul de sac in the cosmic neighborhood, "we will find that we might not be the smartest kid on the block," surmised Loeb. That is, of course, if an alien civilization doesn't find us first — if it hasn't already. It could be that "we are not significant enough for them to interact with us," suggests Loeb, "like ants" we're apt to ignore as we're traversing a sidewalk — unless we're staring intently at our feet. Considering that the majority of stars formed before our Sun, other forms of intelligent life could have a 1 billion year jumpstart on humanity in technology. With no frame of reference for their advances, they would seem magical or "like God."

One technology that may not surprise us is the lightsail. Like a windsail harnesses the breeze to propel a watercraft between landmasses, a lightsail harnesses the power of light to propel a spacecraft across the vast gulfs between stars. Loeb heads the advisory committee for the Breakthrough Starshot project, which aims to visit the nearest star (Proxima Centauri) and its potentially tenable exoplanet (Proxima B) and even snap photos. How? A lightsail literally beamed through space (with lasers!) at one-fifth the speed of light. The tiny spacecraft, measuring four meters in diameter and weighing a matter of grams, would carry an onboard camera, computer, communications laser, and plutonium power source. In total, the mission would take about 25-30 years — over two decades for the little spacecrafts to get within range, and another four to five years for the data to be pinged back to Earth.

This is all very fascinating and exciting to us, but it actually may not be at all original. That's because thousands of trapped interstellar objects are likely already present in our solar system, "and if there is another civilization … that has this technology developed to maturity, then they may have used it," Loeb predicts. One that especially captured the attention of the international media and the scientific community was 'Oumuamua in October of 2017, first observed from Hawaii ('Oumuamua is Hawaiian for "scout" or "messenger"). While many of Loeb's peers discounted it as "purely natural in origin," Loeb wasn't so sure.

"This is the first object that we noticed from outside the solar system that they came within the vicinity of the earth. And it looked very peculiar. Firstly, it tumbled every eight hours and in the process of doing so, the amount of sunlight that it reflected changed by at least a factor of 10. So that implies that the object is at least 10 times longer than it is wide. But if you're not looking at it edge on, it might actually be much thinner than that. And that's a much more extreme geometry than we've seen before for any comet or asteroid," he explained. Furthermore, it did not show any cometary features like a tail or loss of mass from melting ice, or an orbit shaped by the gravitational force of the sun. "So we suggested that maybe the sunlight reflected off it is giving it the push. And in order for that to be the case, in order for that to be effective, the object needs to be very thin, and act like a lightsail."

"It's not easy to detect objects unless they're big enough, so 'Oumuamua is 100 meters, and we saw the reflected sunlight — but it may well be that there are lots of things moving through space that we don't notice, and if we don't look, we will never notice," Loeb posited.

Open-mindedness and humility have long guided Loeb's onboard navigation systems, from his days working on the family farm in Israel all the way to academia. He compares the scientific process to detective work or chipping away at a block of marble. To him, being a scientist is an extension of childhood curiosity, when every possibility was on the table. Know what you don't know, and share and utilize what you do. Because no matter your field of expertise, there's nothing worse for science than having your head up your own asteroid.

"Many of my colleagues say we should wait until we are sure about something and only then communicate to the public. But I find that a bit arrogant because it gives the sense that scientists are the elite and they're preaching to the public. And that is the reason why many populist movements regard science as part of the elite, because the scientists elevate themselves to an ivory tower where they speak amongst themselves, not necessarily making this clear to the public, and only come out when they feel it's the right time." This foments distrust, and by extension misguided policymaking and behavior. In short, the opposite of intelligent signs of life.

"I have a very simple rule: If you are doing things that benefit you in the long run, you are intelligent. Do what promotes you the best." On an individual scale — one of the very minutest in the universe — that means making healthy decisions regarding lifestyle and relationships. On a humanity scale, it means thinking less in terms of nation-states and more in terms of quantum states, collaborating to put our best fleet forward as we foray into space. If this seems a bit idealistic, Loeb agrees.

Our best chance at surviving as a species, he argues, is to not "put all our eggs in one basket, to spread our civilization elsewhere." There are two ways we could do that: either transporting ourselves to colonize habitable planets or sending the equipment and raw materials capable of remotely replicating ourselves — essentially biological 3D printing. It's not as farfetched as you may think — Canadian-American biologist and Nobel winner Jack W. Szostak, a major contributor to the Human Genome Project, has already made tremendous headway into synthesizing life in a laboratory setting. With multiple planets hosting the human race, losing one to our own stupidity would not mean our total extinction. Earth would essentially be our mulligan.

Loeb compares life on Earth as a cake, baked under a specific range of conditions with a specific set of ingredients. However, tweaking ratios and time in the oven can produce vastly disparate results. "We are very proud of ourselves for no good reason. How do we know it's the best cake?" Loeb asks.

As it stands, we may not be the best cake, but at least we're not a burnt cake. To keep it that way, Loeb argues, we should avoid arrogance (thinking we're superior) and conviction (thinking we're right without evidence). For a species that has repeatedly and historically hiked up its own skirt and flung open its own trenchcoat (look at me!), a little bit of cosmic modesty might ultimately make our tiny pebble worth paying attention to.

Matt Swanseger has never been so arrogant to even attempt to bake a cake. He can be reached at mswanseger@eriereader.com