At Play in the Fields of the Bored: Music to move you 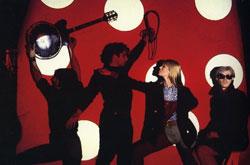 When I was young and foolish, as opposed to now when I am just foolish, I didn't know music. I had heard the Beatles and Motown but didn't know them. I was shackled to Top 40 radio and the hair bands of MTV. I just didn't know any better.

Then I stumbled into a moment of time that changed my life. I had gotten into classic rock in a big way, but still just the surface, a never-ending stream of "Best Of" albums with no bite.

I was at a friend's house and we were sharing music. He had somehow come across a Velvet Underground album and just the picture of the band on the cover, looking dangerous, drove me to the best decision of my young life. Almost note unheard, I traded away The Best of The Steve Miller Band for V/U.

The music was dark and hard and frightening and enriching, all at once. It spoke truth. Life wasn't all peaches and shaking trees, this I had discovered early. But I never had a soundtrack for the sullen poetics of my mind.

The first time you hear "Venus in Furs" it changes your perspective. It grips you and you cock your head and things seem to make more sense. It scared me, in a fantastic way.

No one's life is altered by being called a space cowboy, or even Maurice, but exploring shiny boots of leather and "whiplash girl-child in the dark," that will correct your mind. It is art.

It had as much to do with the timing as it did the music, but the power of the music cannot be understated. It's like good literature. Reading "Catcher in the Rye" or "On the Road" at 30 does not have the same impact as it does at 14. In fact, it is probably a bad idea. You just end up feeling like a phony. But they are introductions into a different mode of thought and expression. And as Lou Reed says, "between thought and expression lies a lifetime."

The Velvets are the musical equivalents of Kerouac. Base starting points from which you can explore everything that contributed to their becoming and the influence on what came next.

Reed's grasp of the artistry of songwriting draws as much from the lyrical stylings of the great Doc Pomus, who wrote "This Magic Moment" and "Save the Last Dance for Me," as from the under appreciated poet Delmore Schwartz. It is lyric laid bare. Music as art that moves you.

When you listen to a band for the first time and the hair on the back of your neck stands up and you feel it, really feel it, it is glorious. That is the art of music. That is why exposure to great music is vital.

The first thing I do when I am granted access to someone's world is check out their music collection. It is a quick indicator of how much energy I should really invest in a new friendship. Unless she's hot.

But music is a unifying medium. You can explore another's soul through a shared musical experience, and the art of the music can drive you to new and better heights.

That is why I am such a huge proponent of the local music scene at present. There are a great number of artists exposing their souls in order to move you, excite you, and lift you to another plane.

There are bands whose music is truly soul stirring. And they live amongst us. And the best part is they are not playing to you but for you.

I can think of ten local acts whose shows I would not miss plus another dozen I've seen multiple times, and I am a music snob. I am also highly attuned to the greatness music can posses and I am impressed with what local acts are producing. I know they are well versed in the musical tradition. They provide rich, deep music that surrounds heavy lyrics soaked in enlightenment drawn from pain as well as joy. Instrumental acts that needn't utter a word on stage but convey a panoply of emotion immediately identifiable yet stirring and unfamiliar. All of it accessible to open souls.

I will repeat it until I am blue in the face and my fingers bloody from pounding out the words: You need to be a part of the scene. You need to attend the shows and listen. You must be a participant.

There is struggle and there is strife, but giving in to the local music scene can lessen the effect because it becomes a shared burden. Whether you hear an artist baring their soul to simple plucked strings, or a band whose vocalist is straining their voice to be heard above the driving force of the music you will feel. And it will feel sublime.

Michael Bennett is the host of Fazed Cookies, Wednesday's from 9 to midnight on 90.5 WERG. He suggests buying every 14 year old you know a copy of "On the Road" and "The Velvet Underground and Nico." For more helpful hints to corrupt the youth email mbennett@eriereader.com