At Play in the Fields of the Bored: Exposure to Craft

Arts N Drafts begins Thursday, Aug. 25. You catch great art, great beer and food, and great music, like Is What It Is, there. 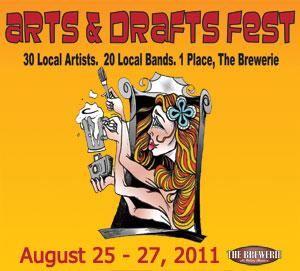 Erie's vibrant art scene has been on display all summer long. From Tuesday nights, to block parties, to gallery walks, some of the city's artists and musicians have had opportunity to display their work.

But, as a full summer of festivals and showcases begins to wind down, there is one more weekend infused with local talent seeking full participation from the community.

The eighth bi-annual Arts N Drafts festival will run Thursday, Aug. 25 through Saturday, Aug. 27 at The Brewerie in Union Station.

Brainchild of local artist Andrew Kauffman, the event's mission is to expose the city to great art.

The Brewerie will play host to between 100 and 150 pieces of original art, as well as 25 local bands and musicians.

The taproom will play host to the indoor portion of the musical acts, kicking off Thursday night with the Open Mic All-Stars. The Brewerie, along with hosts Katie Chriest and Sheldon Peterson, have a long running open mic night. For Arts N Drafts they will feature some of the best singer-songwriters those nights have to offer.

After their triumphant turn on the mainstage at Celebrate Erie, Is What It Is will bring their genre-defying music to the opening night of Arts N Drafts.

Steve Trohoske, Ian Smith, and Kenny "Stix" Thompson of Is What It Is, along with Joel Polacci of the Bill Burke Trio, Carla Fleming of Lake Erie Belly Dance, Anna Haller of Satori Hoops, and Jennifer Dennehy of Dennehy Hoops put on a masterful show of music and movement.

Pride can take many forms. It can be an overinflated sense of self or the purest expression of independent self-congratulation. The members of Is What It Is and their compatriots on stage at Celebrate Erie should be filled with the latter. A pride in performance well done and perfection achieved.

Whether playing their original compositions or a great take on a piece by jazz sax legend Wayne Shorter, the band was tight, even inspired. The percussive mix of Stix' drumming and Polacci's beating of the congas, held down by Trohoske's bass created an atmosphere of exploration for Smith's guitar mastery to flow through and over and keep the crowd moving, and astonished by the sound.

"The experience was just awesome," Stix said. Still beaming from the event days later. "To play in front of thousands of people in your hometown… To see and feel the same things that the audience was feeling was incredible. It was a great experience; one of the best I've ever had."

The audience did move, and the good energy the band was laying down was felt throughout the crowd. And if the music didn't grab enough attention the dancers most certainly did. Haller and Dennehy, as Tiger Lily and the Red Chameleon, respectively, showed off hooping as a true art form. Their bodies done up in wonderful paint jobs by artist Amy Gaughn, held the audience in rapt attention. They portrayed the two extremes of good and bad, light and darkness only finding balance when Fleming was onstage to combine for a spectacular performance.

Fleming even took a moment to step away from the dance and into lead singer. Her song "Heart of a Woman" was well received by the audience, as was the entire act. It was hard to tell if everyone on stage really knew how intensely the audience was digging the performance.

"I was happy with my performance, especially after being sick all week and in the hospital twice," Stix said. "Trohoske and Smith held it down, and Polacci added so much. And the girls were outstanding. I'd work with them again anytime."

Erie would benefit from a reunion show. If anything created a true buzz from Celebrate Erie this year, it was the Is What It Is show.

"I have friends with kids from 8 to 18 who said their sons or daughters loved the music," Stix said. "I hope it gears them up to grab an instrument and then it be what it be."

But back to Arts N Drafts, where you can catch Is What It Is.

The trackside beer garden will also feature great musical acts throughout the weekend, including Johnny James And The Absolutes, East Clintwood, and Shotgun Jubilee.

As the festival prepares to close out it's fourth year, founder Kauffman is still shocked by the overwhelming response the event receives.

"It has dumbfounded me to be honest," he said. "When I put this idea together I just wanted to do one event to show people you can do anything you want and work for. Now everybody hounds me. The artists and the musicians, even the general public, people are always asking me, 'When is [Arts N Drafts] coming up?'"

Kauffman isn't alone in his passion for the local art scene. Arts N Drafts is a wholly volunteer event. From the artist' submissions, to the musicians' time and effort, all of it is done for free. Of course, it also allows for a certain notoriety and exposure many artists may not receive. Plus, the possibility of selling a painting, photograph, sculpture or album is quite promising.

"The only way this event comes off is with volunteerism," Kauffman said. "The established and non-established artists and musicians; it is all volunteer based. Everybody puts in their energy and desire into making the art scene stronger, more available for the general public of Erie."

Arts N Drafts also functions as a benefactor for the local scene, Tapper explained. After 9 p.m. a $2 donation will be taken at the door and go towards funding the local art community.

The Brewerie will also be offering it's own brand of art during the festival. Their new Peach Street Wheat Ale will be on display, along with Brewgrass lemongrass summer ale, Chaffee's Hard Lemonade and their standards and guest brews.

Beer, art, and music are a fitting way to spend a day, but the festival is really about fostering community.

"It couldn't be done without The Brewerie and the people who are invested in the long-term vision of making the art and music scene more available to the general public," Kauffman said. "We're all involved in this together. If we don't work together and become passionate to a level where we can develop ideas we would never be able to put together events like this. We all have to work together, especially these days."

It is a unique opportunity for Erie to be able to display the local art and music of every style and design in the most accessible of situations. Arts N Drafts reaches out to every corner of the community drawing on talent and inquisitive minds to delight in local ingenuity.

"Basically, it's a situation where opening doors in your mind leads you to good things," Tapper said succinctly. "It's bands you're never going to expect to hear and different genres you would never normally hear in one place. Art forms of all sorts that people wouldn't get exposure to."

Michael Bennett can be reached at mbennett@eriereader.com.