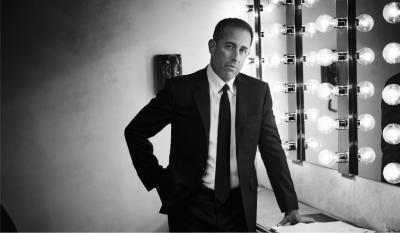 "When most people hear 'Seinfeld,' they know exactly who it's referring to." These are the words of Brandon Boyd, Coordinator of Communications and Client Relations for Erie Events, co-hosts of Jerry Seinfeld's upcoming stand-up show at the Warner Theatre.

Boyd is absolutely right; even people who aren't familiar with Seinfeld the person are familiar with his show, a self-described "show about nothing" that ran for nine seasons throughout the '90s. Culturally speaking, it's often cited as the greatest American sitcom of all-time. This leads to Seinfeld at the Warner Theatre being not only a must-see show, but an amazing economic opportunity for our city.

"It brings a tremendous amount of excitement and buzz," continues Boyd. "Erie's response has been dynamic. The show is nearly sold out. Erie has responded by saying it loves opportunities to see acts like this, and we don't take that lightly. You'll see a lot of people not only at our show, but grabbing dinner around town and making a night of it. That means more business not just for us, but for Erie in general. It's a win for our patrons and a win for Erie."

There's no understating the impact Seinfeld and his show have had on pop culture, from comedy and television to podcasts — even in Erie. Hosted by local Star 104 DJs Tim Murphy and Ted Hallowell, the "No Hugging, No Learning" podcast finds the duo analyzing the series episode by episode, in order — something neither of the hosts have actually attempted before. The show is still in its infancy with an entire creative road ahead of it, but it's just another single example of the legacy Seinfeld carries — even in a city like Erie. — Aaron Mook