Make room on your bookshelf. The best selling author of Go the F**k to Sleep is back to take on the tedium of toddlerhood. 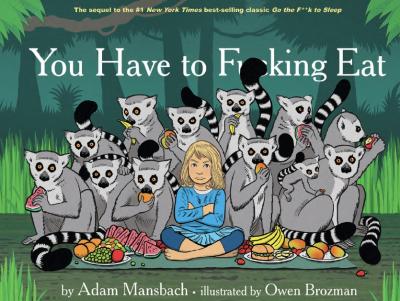 Great children's books are rare. Great parodies are even harder to find.

So this week when Adam Mansbach, the author of 2011's smash hit, Go the Fuck to Sleep, released the parent-centered followup, You Have to Fucking Eat, it was something to be thankful for.

If the first title sounds familiar, it's likely because Go the Fuck to Sleep was a number one New York Times bestseller and it's sold more than one and a half million copies on Amazon.

If those numbers aren't impressive enough, head over to YouTube to listen to any of the numerous inspired celebrity readings, including the ever popular rendition by Samuel L. Jackson.

You Have to Fucking Eat is poised to be equally successful. Celebrity readings from Breaking Bad's Bryan Cranston and comedian Stephen Fry have already hit the web.

It's not likely to rival Harry Potter and the Chamber of Secrets in the annals of sequel success stories. But it fits nicely in a niche genre that includes such classic titles as Toddlers are A**holes: It's not Your Fault and Sh*tty Mom: A Parenting Guide for the Rest of Us, and in an era of cultural critics who decry anything that didn't originate in the Book of Genesis, it's nice to know that kid (well, parent) lit can come with a sense of humor.