Back in the Day: Lincoln in Erie 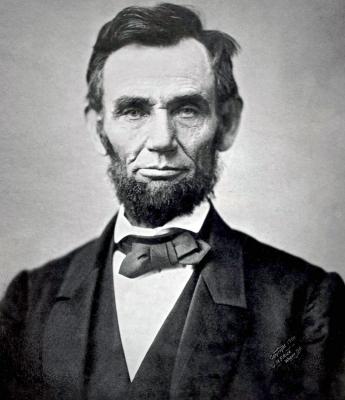 One of Erie, Pennsylvania's most famous early residents was Horace Greeley, the famed newspaper editor and later presidential candidate. His family had moved to Erie County in the late 1820s, and young Horace worked briefly on local publications, including most notably, the Erie Gazette.

Greeley lived for a short time on the west side of Fourth and State streets in a building that still stands. There is a small metal plaque out in front of the building that notes his residence.

If the legendary editor incubated some of his journalistic skills in Erie, the experience did not make him overly fond of the place, and he once said – in his typically bombastic way – "Erie is the shabbiest and most broken-down looking large town, I, an individual not wholly untraveled, ever saw in a free state…" Nor did he apparently feel much loyalty to the city when he openly supported a boycott of all Erie hospitality facilities by travelers during the notorious Railroad War of 1853-54, which took place in Erie County.

Greeley – who had famously exhorted "Go West, young man" – had himself gone East, to New York City, where his political writing had by the late 1830s made him a national figure. The mid-1850s was a period when the national Whig Party, which had recently dominated American politics, became hopelessly split over the slavery question, and almost overnight had ceased to exist. Three recent presidents had been Whigs – William Henry Harrison, John Tyler and Zachary Taylor – but by 1856 there was a new party, the antislavery Republicans.

That year, the Republicans put up their first presidential candidate, John Fremont, but he was defeated by Pennsylvanian James Buchanan. By 1858, however, the Buchanan administration had become mired in corruption and inaction on the slavery question, which was rapidly propelling the nation toward civil war.

Greeley, by that time, had made himself a behind-the-scenes antislavery force, and initially he supported the well-known Senator Stephen Douglas of Illinois, a Democrat, to run for president in 1860. Douglas had already played a significant role in the emerging new states of the Midwest, but was preoccupied with his re-election as a senator in 1858. His opponent that year was a rural railroad lawyer and former one-term congressman (1843-45) named Abraham Lincoln. Greeley initially tried to persuade Lincoln not to campaign against Douglas, but the young attorney and his political allies resisted his efforts, and Lincoln challenged Douglas to a series of debates. In these debates, which became historic American political events, Lincoln became nationally famous for his eloquent critique of slavery, while Douglas took up the compromise policy of "popular sovereignty" that turned away many Democrats such as Greeley.

Douglas won the senate race, and the next year both he and Lincoln became candidates for president in 1860. Douglas, however, was the overwhelming favorite of northern Democrats, while southern pro-slavery Democrats were lining up behind Buchanan's vice president John Breckenridge. This split created an enormous opportunity for the fledgling Republican Party to win the White House on its second try.

Lincoln initially was at the bottom of the list of about a dozen GOP candidates. Gov. William Seward of New York was the frontrunner and early favorite. But in February 1860, only a few months before the Republican convention, Lincoln went to New York City and gave a speech at the Cooper Union, which electrified Republicans throughout the north.

Greeley downplayed Seward and championed Lincoln in his newspaper. Greeley could take considerable credit for Lincoln's eventual nomination and election in November 1860, including his work for Lincoln at the Republican convention that summer in Chicago.

The "rail splitter" from Illinois was now the president-elect. He was also the object of enormous popular curiosity throughout the North, and because of his known anti-slavery sentiments, he was much feared in the South. In those days, a new president was inaugurated on March 4 (and not on Jan. 20 as today).

Lincoln remained in Springfield, Ill., as he prepared to take over the government, but the national crisis over slavery would not wait for March 4. In early 1861, several southern states began to secede from the union. These "Confederate" states had chosen Senator Jefferson Davis, a former U.S. secretary of war, to be their president.

In February, Davis made a triumphal journey from Mississippi to Montgomery, Ala. to take office. At the same time, Lincoln conceived a plan to take a railroad journey from Springfield to Washington, D.C., stopping frequently along the way to introduce himself to the American people and to reassure them that civil war could be avoided. Beginning on Feb. 11, Lincoln and his family, and a contingent of close friends and political allies, made their way east on a special Lincoln train.

All was going well on the train during its many stops, when early in the morning on Saturday, Feb. 16, the train left Cleveland on its way to Buffalo, where the presidential party would spend the night and all day on Sunday. Along the train's route, curious Americans had gathered to catch a glimpse of their new president, and the trip on that day was no different. As recounted in Daniel Stashower's new book "Hour Of Peril," the Lincoln special train had made its way slowly across northern Ohio, and proceeded to cross the state line into Erie County, Pennsylvania.

The train then stopped unexpectedly in the small town of Girard to pick up a special passenger, Horace Greeley. (Girard, small as it was, did have a famous resident, the earliest U.S. circus impresario, Dan Rice, who had made Girard his company's winter quarters in 1840 and thus the birthplace of the modern American circus.)

The book's author does not note, nor may not have known about, Greeley's earlier roots in Erie County, and thus why the journalist chose Girard as the place he would board the train. Greeley, of course, had selected the small station because it would enable him to interview Lincoln, and then get off the train in Erie where he would telegraph the interview to his newspaper in New York.

Once on board the train, he was immediately ushered to Lincoln's private car where he was greeted by and interviewed the president-elect. The next stop was to be the city of Erie, where Lincoln was scheduled to get off the train for a lunch and short speech. Greeley, as he planned, got off the train, and telegraphed his story to the New York Tribune. (Lincoln's train journey was the number-one news story in the north, and the whole nation was following reports as the president-elect made his way to Washington, D.C.)

Lincoln did stop in Erie, have lunch at the local station, and after shaking hands with many of the local citizens, made a few remarks. (The only words he spoke in Erie that were recorded were: "When the time for speaking, fully and plainly, comes, I trust I would say nothing not in accordance with the Constitution and the laws and the manifest interests of the whole country.") From the city of Erie, the train then proceeded through the eastern part of Erie County to North East, and from there into New York state and a stop in Westfield where Lincoln departed from the train to greet young Grace Bedell, a little girl who had earlier written to the president-elect in Springfield suggesting he grow whiskers to appear more presidential.

Simultaneous to all of these celebratory events on the special train, a great drama was unfolding at its final two stops, Baltimore and Washington, D.C. America's most famed detective of that era, Alan Pinkerton was feverishly attempting to uncover and prevent a purported plot to assassinate Lincoln in Baltimore. At the same time, the commander of the U.S. armed forces, Gen. Winfield Scott and Gov. Seward, now Lincoln's designated secretary of state, were together, and independent of Pinkerton, trying to respond to similar rumors of a plot in Baltimore, and planning ways to protect the new president.

Unaware of most of this, all was calm on the Lincoln Special train as it passed through Erie County and stopped in the city. A few days later, however, the anticipated conspiracy in Baltimore would lead to a sensational and controversial detour that would stun the nation and preoccupy Lincoln in the first days of his presidency.

The plot in Baltimore was thwarted, as "Hour of Peril" brilliantly recounts, but Abraham Lincoln would return to Erie by train one more time four years later, after the Civil War had just ended, and another assassination plot had tragically succeeded.