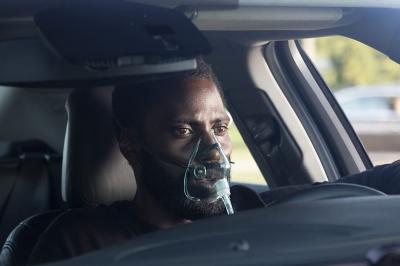 Christopher Nolan is a filmmaker obsessed with time. Films as varied as Memento, Inception, Interstellar, and Dunkirk have shown the director's particular fascination with the way people perceive and experience the passage of time. It was only natural that he would eventually make a film solely about time travel and his new film Tenet is his own take on the genre. The film manages to display both Nolan's best (clever ideas and creative set pieces) and worst (a disinterest in characterization and human emotions) qualities, but the good things make it an entertaining ride.

John David Washington plays a CIA operative who gets recruited by a secret organization that is trying to stop a Russian oligarch (Kenneth Branagh) from starting World War III through a device that can somehow reverse chronology. Helping him on this mission are a fellow operative (Robert Pattinson) who seems to know more than he lets on and the oligarch's estranged wife (Elizabeth Debicki), who sees this mission as her ticket to freedom.

The film spends very little of its 150 minutes developing its characters to the point that Washington's character doesn't even get a name. Debicki's character is the only one we really get to know and she sadly gets less to do as the story moves on. Also, technical issues that Nolan has been criticized about before like sloppy editing and deafening sound mixing get ramped into overdrive here. With that said, the action sequences are expectedly breathtaking and its interesting twist on time travel is enough to somewhat forgive its flaws. Tenet is what Nolan's career has always been heading towards, for better and for worse. — Forest Taylor