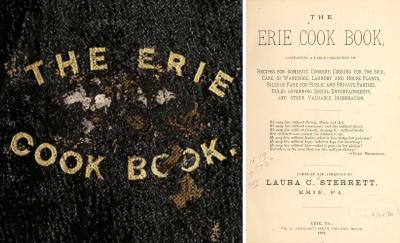 Contributed Photo
Laura C. Sterrett, whose father-in-law Joseph M. Sterrett founded the Erie Gazette in 1820, got into the publishing business herself with The Erie Cookbook. While antiquated to sometimes comical effect, it nonetheless provides a fascinating glimpse into the lifestyle of late 19th century upper-class Erieites.

The cookbook is unremarkable at first glance: bare text, no photographs. The pages are weathered and yellowed with age.

Its title is comically long, sprawled across the cover page in all caps in an old serif font: THE ERIE COOK BOOK, CONTAINING A LARGE COLLECTION OF RECIPES FOR DOMESTIC COOKERY, COOKING FOR THE SICK, CARE OF WARDROBE, LAUNDRY AND HOUSE PLANTS, BILLS OF FARE FOR PUBLIC AND PRIVATE PARTIES, RULES GOVERNING SOCIAL ENTERTAINMENTS, AND OTHER VALUABLE INFORMATION.

It was published in 1881 on a modest steam press run by William P. Atkinson. Atkinson was a Civil War veteran — having survived the Battles of Second Bull Run, Fredericksburg, and Antietam — and business manager for the Erie Evening Herald. The collection itself was "compiled and arranged" by a family friend, an Erie woman named Laura C. Sterrett. Most who are familiar with Erie history will recognize the surname. Robert and James Sterrett were two of the Erie area's first non-native permanent residents in the early 19th-century. The local road name "Sterrettania" derives from James's wife Anna, an amalgamation of "Sterrett" and "Anna."

Even more well-known though was James and Anna's son, Joseph M. Sterrett. He was the newspaperman who founded the Erie Gazette in 1820 and went on to become one of Erie's most prominent residents: county commissioner, state senator, judge, and postmaster.

He also happened to be Laura's father-in-law. Born Laura McCalmont in 1843, she married the judge's son, Joseph Ritner Sterrett. The younger Joseph worked for his father's Erie Gazette, while being involved in numerous other ventures, which included operations at the Park Place Hotel and assisting with local census collection. They had three children together: Alfred, Cora Belle, and Anna May.

When The Erie Cook Book was published, they were living on West Seventh Street with their teenage daughters. It's difficult to gauge how many copies actually circulated throughout the city. As the full title suggests though, what appears to be this rather ordinary 19th century cookbook turns out to be much more than pages of old recipes. Its pages are filled with Laura's commentary, often wittily so, and provides modern readers with a notable glimpse of not only her personality, but also the culture and social atmosphere of Erie's 19th century elite.

Erie transformed during the 1880s. Increased connectivity by rail and road coupled with the dramatic growth of industrial jobs spiked the city's population from around 10,000 at the onset of the Civil War to nearly 28,000 in 1880. By 1890, it eclipsed 40,000 residents. By this point, the city had over a hundred established industries. Most roads had been cobblestoned or stone blocked. For those with leisure time, there was plenty to do downtown, including a theater, a music hall, three beer gardens, and city parks.

Laura's book provides an even deeper look into the everyday lives of many Erie residents during this transformative time — although, of course, it still includes plenty of savory and surprising recipes.

"Most of the recipes in this book have been tested by myself or friends," Laura wrote in the preface. "I feel safe in saying that no one will be disappointed in any of them."

There are familiar staples: soups and salads, cakes and pastries, pickles and preserves. There are likewise plenty of recipes not so familiar to our modern palates: beef tongue served with rice, squirrel and pigeon pies, calves foot jelly, and baked lamb's heart.

"Bake a heart as you would roast beef," Laura advised. "It is very nice for dinner."

There's other practical food-related advice. Spoiled milk? It can be "rendered fit" again by "stirring in a little soda." Rancid butter? That's easily fixed with "fifteen drops of chloride of lime to a pint of cold water."

Many locals contributed their own recipes. A.J. Foster, president of the Erie Boot and Shoe Company, provided his catsup recipe: a standard tomato-base seasoned with cinnamon, allspice, celery seed, and black and red pepper. Mrs. Saltsman revealed her recipe for chicken croquettes while Mrs. Hastings explained how to pickle 100 large oysters properly.

Even a recipe for cologne is included, a concoction of alcohol and the oils of rosemary, lavender, rose, lemon, and bergamot orange.

Laura closed these chapters with a few dire warnings for those looking to retain their youthfulness. "Strong coffee, hot bread and butter, heated grease, highly spiced soups, meats or game, hot drinks, alcoholic liquors, [and] fat meats all are damaging to the beauty," she concluded, adding that strong teas make one's skin leathery and eating supper late will cause pimples.

The rest of the book functions as an intermingling of snake-oil antidotes and self-help counsel. There are remedies for just about any ailment. If you're sick, try beef tea, rice water, or an uncooked egg mixed with brandy and milk. If you need to stop bleeding, apply a paste made from vinegar and flour or wet some tea leaves to use as a bandage. A colicky baby? Try catnip. A rusty nail wound? Pork fat and turpentine is the cure-all. Frostbite? Rubbing a salted onion on it should do the trick.

Her "Hints for the Well" read as the sort of mystical advice our grandparents regularly shared with us as kids.

"Cleanliness is next to godliness," wrote Laura. "Always rest before and after a hearty meal. … Eat in pure air and in pleasant company; light conversation and gentle exercise promote digestion."

And surely, don't ever sleep in the clothing you wore during the day. "Three pints of moisture, filled with the waste of the body, are given off every twenty-four hours, and mostly absorbed by the clothing," she explained.

A nosed wiped too often will end up deformed, the softness of hands should be preserved with gloves, and feet should be "frequently and thoroughly washed … [or] the poisons given off are taken back into the system.

She even dedicated a section to freckles. "Grate horse-radish fine; let it stand a few hours in buttermilk, then strain and use the wash," she recommended. "Freckles indicate defective digestion."

Perhaps the most amusing glance into late-19th century life in Erie is The Erie Cook Book's chapter on social entertainments, describing events common for upper-class Erie residents during this time.

A kettle-drum was the term for when a group of women gathered for tea-drinking, sandwiches, and cake.

"The hostess, of course, is ready to receive her friends at the hour named," wrote Laura, "and welcoming each one with a cordial greeting, must have general supervision of her guests, although it is impossible to pay much individual attention and few introductions can be made. The hostess cannot be entirely responsible for the enjoyment of her guests."

Unlike the French or English, Laura clarified, American women lacked the "savoir faire which makes each guest feel at ease with her neighbor."

Luncheon parties differed from kettle-drums in that gentlemen were also invited. She described these as less solemn and "devoid of restraint" with dishes "which best please the palate."

Meats, desserts, and candies were required. "Have plenty of pickles or olives," she added, along with, "oysters in all styles [and] peas and hot potato chips."

If dancing was to take place at a party with gentlemen though, Laura emphasized restraint: "A young lady should never attend dancing company unchaperoned." Furthermore, a young lady was "never [to] accept the escort home of anyone but an intimate friend."

The Erie Cook Book by no accounts tells the story of all Erie residents during the 1880s — but it does provide a unique lens through which modern readers can collectively understand what it was like to live in Erie through a segment of the population's cuisine and customs.

As for the recipes? It's an extraordinary collection — and frankly, you can learn a lot about a place's history through its food. So, find yourself a copy of The Erie Cook Book and make yourself some calves foot jelly… or, if you're not feeling so adventurous, stick with the beef stew.

Petal Yourself to the Port Farms Flower Festival