One noteworthy niche in the Gallery Night lineup will be Paul Kuhrman's ALL STAR BREAK. 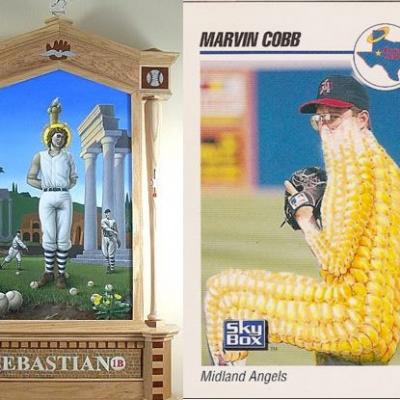 One noteworthy niche in the Gallery Night lineup will be Paul Kuhrman's ALL STAR BREAK, at the 319W2 Project Space. The Pittsburgh native, long-time New York City resident and devout Pittsburgh Pirates fan has been exploring, tongue-in-cheek, the intersection of sports, religion, art history and pop culture for more than a decade.

In ALL STAR BREAK, we'll see some of his "defaced" baseball cards where he revises the existing card into something more and, in selected cases, a visual pun associated with the player's name.

The space will also feature one of his baseball-themed altarpieces, St. Sebastian, where the main figure is tied to a baseball bat and assaulted with baseballs rather than stuck with arrows (you have to know something about Catholic iconography to get the joke here).

Available for purchase at the show will be decks of Tarot de Cooperstown cards, which replace the wands, cups, swords and coins of the minor arcana with bats, gloves, bases, and balls. It can also be used to play a version of baseball.

It may be a small show, but Kuhrman ain't no bush league player. No need for your rally cap here — this one's a winner. — Mary Birdsong