by Jonathan Burdick
View ProfileTwitterInstagramRSS Feed
April 16, 2020 at 11:43 AM 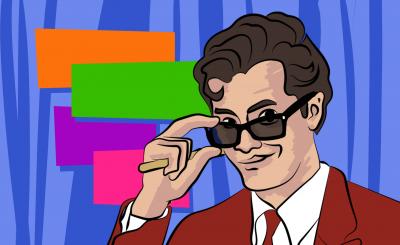 Nick Warren
He Is Spartacus: Tom Everett Scott plays drummer Guy Patterson in That Thing You Do!

If there is one movie that Erie embraces as their own, that movie is likely 1996's That Thing You Do!

Even though it wasn't filmed here in our city, the story of its fictional 1960s one-hit-wonder pop band The Wonders (first known as The Oneders) begins in the heart of Erie, Pennsylvania.

I was ten-years-old when the movie hit theaters and when I first heard "Erie, Pennsylvania" and "State Street" and "Mercyhurst College" in a big-time Hollywood movie, it was shocking — especially being in a film that was a passion project for Tom Hanks. His directorial debut falling between roles in Toy Story and Saving Private Ryan, the film's record label even gave way to the real-life production company, Playtone.

Hollywood seemed so mystical and other-worldly to me as a small-town kid, so the Erie connection made That Thing You Do! seem like it was somehow more my movie, our movie, that we somehow had a special claim on it living here. The Wonders, fictional or not, were ours and the title song became an anthem, of sorts, for many of us living in the area.

In the movie, of course, the movie's titular song becomes a chart-topping sensation, and the four wide-eyed bandmates leave Pennsylvania for a television appearance in Los Angeles, giving them an early taste of superstardom.

"You gotta be quick with me," guitarist Lenny Haise, played by Steve Zahn, says to a couple of city guys during a card game. "I'm from Erie, PA."

The joke, of course, was not lost on us in our slow-moving corner of Pennsylvania.

The title song from the fictional band was a hit outside of the film too. Written by Adam Schlesinger, founding member of Fountains of Wayne, the song was nominated for an Academy Award (and let's be real, we all know that it should have won), a Golden Globe, and hit number 41 on the Billboard Hot 100.

Tragically, Schlesinger died on April 1, 2020 due to complications from COVID-19.

As a result, the band is getting back together this Friday, April 17 at 7 p.m. EST. The original actors who portrayed The Wonders will be holding a watch party of That Thing You Do! in honor of Adam and to raise funds to support out-of-work musicians as a part of the MusiCares COVID-19 Relief Fund. Hanks and his wife, Rita Wilson were two of the first high-profile celebrities to be publicly diagnosed with COVID-19 after filming in Australia, and have since recovered.

There would be no Playtone without Adam Schlesinger, without his That Thing You Do! He was a One-der. Lost him to Covid-19. Terribly sad today. Hanx

"On our side, we're going to be part of a Zoom session with me, Steve Zahn, Johnathon Schaech, [and] Ethan Embry," Tom Everett Scott told me in a conversation on Wednesday. Scott portrayed the movie's main character, salesman-turned-drummer Guy Patterson.

You will be able to access the live-streamed Zoom conversation this Friday via the YouTube channel for The Wonders (and if you want notifications, be sure to subscribe and set a reminder). Scott also added that there will likely be some other very special guests from the cast involved, including Liv Tyler.

"We're all just shut in and freaking out," he added. "This will be a respite from that — a chance to sing, dance, and laugh."

Of course, the reunion is bittersweet considering Schlesinger's death.

"We all came up with the MusiCares COVID-19 Relief Fund, which helps honor Adam," said Scott. Having the opportunity to raise money for a charity helping musicians seemed like a natural choice.

"Also, I just want to give a shoutout to Erie," he added. "We have a love affair with Erie, even though we never shot there for the movie, but it's such a big part of the film."

In a strange turn of events, hours before news broke of Schlesinger's death, the Erie SeaWolves had tweeted that they would be changing their team name to The Wonders for a game during the 2021 season.

"When I saw that, it was obviously right before Adam died," Scott told me. Of course, news came out hours later about his death, shocking many of us who hadn't even known he was sick. "The GM of the team [Greg Coleman] posted the classiest tweet about it and I thanked him for it. It was such a joyful moment [seeing the SeaWolves' announcement] and then the wind got sucked out of us."

The SeaWolves announce today that they will be changing their name to the Erie Wonders for a game during the 2021...

If the SeaWolves game honoring The Wonders happens someday? Scott is definitely on board.

"The four of us — Me, Steve, Johnathon, and Ethan, and Tom too — are huge baseball fans," he said, noting that they often watch Dodgers games together. He added that each of the original actors who played The Wonders would certainly be interested too, if they were all available. "We are super interested when this is all back to going to live games, we would love to come on Wonders Day and throw out a pitch or something. We are huge fans."

As for participating in the watch party on Friday, when the livestream of That Thing You Do! begins, all viewers will begin the movie by hitting "play" at the same time as the original cast. Then, the livestream on YouTube will contain real-time discussion among the actors and, almost certainly, plenty of memories and laughs.

You can donate to the MusiCares COVID-19 Relief Fund here and if you have lost income due to the cancellation of scheduled gigs or performances, you can apply for relief here.

Jonathan Burdick can be reached at jburdick@eriereader and on twitter @RustDirt.