Beelzebub's Salsas are the "Happy Accidents" that get hotter each season.

Beelzebub's Eric Laughery is passionate not only about his products (locally-sourced ingredients whenever possible, no additives or preservatives), but also their versatility. 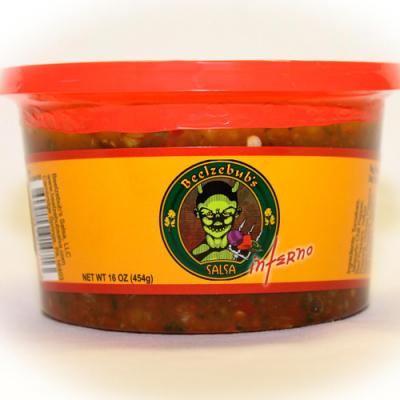 If there's one thing for certain about demonologists, it is that it's hell getting them to agree. There's little debate that fallen angel and demonic prince Beelzebub is kind of a big deal at cosmological juggernaut Lucifer & Associates, but no one's exactly clear on what he actually does. Depending on which demonology you follow (and we all have our personal preference), his title ranges anywhere from "Abomination-In-Chief" to "Idolator Outreach Coordinator" to "Vice President, Pride/Envy/Gluttony Division" (choose one). Or maybe, due to constant restructuring and reshuffling of the demonic org chart, he has tried his hand at all of the above. Sigh. Damned bureaucracy is enough to make your head spin in Nine Circles.

I caught up with Bubs on a country road in Cambridge Springs, just off PA Route 99 and well outside of the Inferno on a soggy Friday evening. He is in a much better place since stepping down at L&A and has found new purpose … as a model, surprisingly. His grinning mug graces the entire product line of Beelzebub's Salsas, the brainchild of gardening-enthusiast-turned-entrepreneur Eric Laughery. After sampling Laughery's creations, I am led to believe Bubs was at his best tempting through the 'buds … because Beelzebub's made a glutton out of me.

Laughery's entire operation was essentially a happy accident. Nearly a decade ago, a love of heirloom peppers and Mexican cuisine led to a particularly overabundant harvest – and the dilemma of what to do with it.

Laughery's entire operation was essentially a happy accident. Nearly a decade ago, a love of heirloom peppers and Mexican cuisine led to a particularly overabundant harvest – and the dilemma of what to do with it. The most obvious solution was to make salsa. Laughery developed three varieties – original, medium, and inferno – then shared them at family gatherings and special occasions. Word spread and before he knew it, he was selling salsa out of a cooler in the back of his truck to strangers in parking lots. "It kind of reminded me of a drug deal going down," he quips.

He mixed up batches of his salsa in a Meadville bar kitchen on the weekends to help meet growing demand, while experimenting with new varieties throughout the week. Eventually, pineapple, black bean corn, garlic-lime, and chipotle garlic joined the original three and Laughery saw enough promise with the business to "go legal." The Health Board approved his kitchen trailer in 2011, which has since been joined by a walk-in cooler and storage shed to complete the Beelzebub's compound. 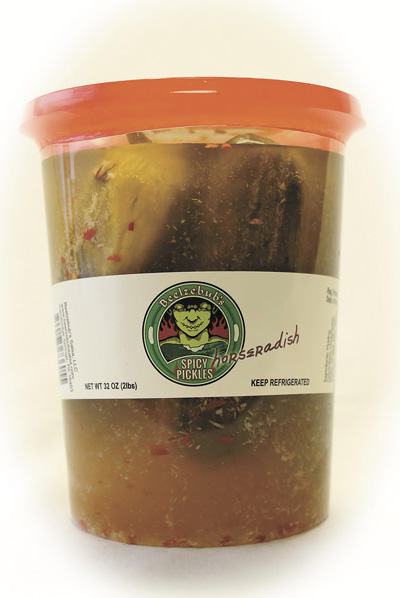 In addition to the seven mainstays of the salsa line, a different seasonal variety is released every other month, employing whatever produce is in season. Given the timing of our meeting, he regrets that he cannot sample his cranberry salsa (November/December), which is his second most popular seasonal to the Maple Chipotle (March/April), made with Pennsylvania maple syrup and smoky chipotles. I settle for a taste of the Honeycrisp Apple salsa, which reminds me more of a chunky applesauce or chutney and feels somewhat mismatched with the traditional tortilla chip – but then again, Beelzebub's is "not just for chips!"

Laughery is passionate not only about his products (locally-sourced ingredients whenever possible, no additives or preservatives), but also their versatility. He has aspirations of releasing a cookbook highlighting the ways salsa can elevate ordinary meals. He also envisions a day when customers can experience his recipes firsthand from a Beelzebub's food truck or storefront. Although hesitant to compromise his intimate customer base or his connection with his suppliers (which include Mennonite cucumber farmers across the road!), he would like to quit his day job. The devil's in the details, I suppose.

Until then, you can obtain Beelzebub's salsa, pickles, and new Golden Eggs (hard-boiled eggs pickled with jalapenos in mustard brine) at Whole Foods Co-op, farmer's markets, and select music festivals. A pint of salsa or a quart of pickles sell at $6 each. The golden eggs come in two varieties – Premium and Farm-to-Table, for $8 or $9 per quart, respectively.

Check beelzebubsalsa.com for a list of varieties and locations.