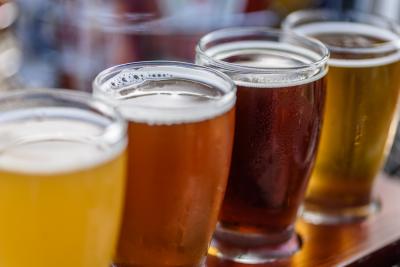 Back in April, it was announced that Beer on the Bay had been officially ixnayed, much to many a draft lover's dismay. But although that keg had been kicked another year down the road due to pandemic concerns, Erie Brewing Company was able to swap in a little something to help slake our thirst in the meantime.

Beer NOT on the Bay 2021 will move the party from Liberty Park to Knowledge Park, with Lake Erie waters not within walking distance but within plain sight from Erie Brewing Company's stunning Lakeview Lanai (lanai is Hawaiian for porch or veranda). This spinoff will be a smaller, more intimate affair than the main series, but will still offer all the ales and lagers you can comfortably handle in a three-hour session.

Should you need something to soak it up, John's Wildwood Pizzeria (Erie Brewing Co. Knowledge Park's food partner) and Beechwood Inn's Hardwood Grille (Erie Brewing Co. West's food partner) will both be on hand with entrees and appetizers to absorb the suds in delicious fashion. You'll also be able to listen to live music and pose with your drinking buddies (or designated drivers!) in the photo booth in between indulgences.

Participating breweries at Beer NOT on the Bay 2021 include:

A portion of all ticket proceeds will benefit the animals at The ANNA Shelter. So even though these beers will NOT be enjoyed on the bay, your attendance would shore mean a lot.