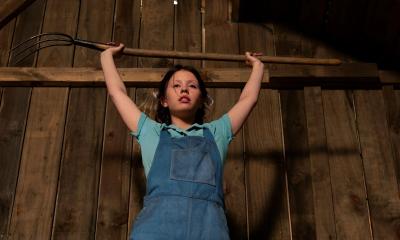 While working on his horror film X, director Ti West and his cast and crew suddenly found themselves stuck in New Zealand at the start of the COVID-19 lockdowns. He used this time to film, in secret, a prequel idea he had been working on with star Mia Goth. The result, Pearl, is a noticeable departure from its sleazy predecessor. While X takes inspiration from the "Porno chic" and exploitation films of the 1970s, Pearl is inspired by the films of Douglas Sirk and the Technicolor musicals and melodramas of Hollywood's Golden Age, resulting in a horror story that looks and feels unlike anything we've seen in quite some time.

Set in 1918, the film follows young Pearl (Goth) who is stuck on her family farm under the eye of her domineering mother (Tandi Wright), caring for her infirm father (Matthew Sunderland) and taking care of all farm duties while the farmhands are away at war. Pearl's only escape is regular trips to the pictures which she has become obsessed with to the point of madness. This obsession, along with her repressed sexuality, begins to reveal itself in increasingly deadly ways.

The beautiful cinematography helps give this film a classic, Old Hollywood feel, making it all the more jarring as the horror elements slowly reveal themselves. Goth also fully commits to the role, giving us a shrieking, wide-eyed, hysterical performance not seen since Patty McCormack's role in The Bad Seed. The mixing of the classical with the horrific may not be to everyone's taste but for those willing to get on the film's campy wavelength, Pearl can be a lot of sadistic fun. Pearl is currently in theaters and comes to the Eerie Horror Fest on Friday, Oct. 7.