Behind The Scene: Babes On The Warpath

Hell hath no fury like a woman with a microphone. What began as a call to arms is now a declaration of war. So, consider this a warning. Our forces are growing. Women playing the stages of our city are turning up the heat. And it ain?t on the oven. 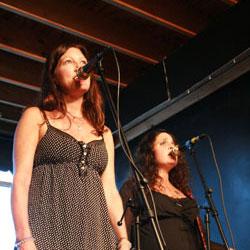 Have you assembled the troops yet?  Scored your weapon of choice? Bass guitar? Drum? Cello, perhaps?

Or maybe attempting to transfer your melody to the stage has got you feeling more in need of a howitzer. Understandable, but please bear in mind, an armory exerts no force without soldiers.

Kristen ?Troll? Bessetti-Nielsen, punk-rock chick from Kill People and FML, suggests the following: ?[?] Women involved in the scene should help rally their female friends who are too scared to jump up onstage and help them overcome their worries [?] Music is about expression. And women are better at that than men.?

Inevitably, the rest of society holds some of the cards as well. This is where everyone comes in ? those who lack a vagina or simply lack interest in the arts. Hell yeah, we?re calling you out, too.

?I believe more women would participate in the music scene if they felt they had emotional backing from friends and family,? said Tracy Evans, co-owner and promotions director for The crooked i. ?Not everyone has a go get ?em attitude.  Some people need that extra reassurance and support.?

Case in point - Julia Haight of acoustic act Waking Yesterday. She charged the lines with a triple threat. She started playing, taking lessons, and writing songs at age 14. She survived the rigors of high school, the isolation without a band behind her, and the arduous task of booking shows. But all the while she had a plan. Touring.

?I used to have this big dream,? she said. ?After I graduated I?d have a van, which I don?t have right now, and drive around the U.S. and play.?

Her parents were not so keen on the idea. Once she ?came of age,? she expected access to a bank account, thus funding her ambitions. Such was not the case. Her summer tour fell through and, now, college is in session.

But she?s still playing gigs and still selling her album, ?I Can?t See But I Can Feel.? There are T-shirts, too. And even with summer at a close, she did mention something about spring break.

Because surrender is not an option. ?Keep playing!? cry the women of the scene. And, accordingly, the Planet Claire gals show no signs of retreat. After teaming up with fellow female musicians, Gina Rullo and Sue Martin own the stage. But getting there, well, that was an uphill battle.

Martin corrected her, ?We had to prove ourselves.?

?Yeah, because people didn?t expect us to last,? Rullo conceded about their previous project, The Killerinas. ?Or expect it??

?To be good,? Martin finished.

?But it was really catchy,? Rullo added.

Rullo smiled, ?And singing along.?

We as women and musicians need to be the masters of our own future, and in doing so, show others it?s very possible. Back in the day, Rullo and Martin were the only two chicks I saw roam freely through the scene, on and off the stage. In fact, as my band loaded gear for our most recent gig, my phone buzzed with a message from Martin. She asked what time we started and promised to swing through right after work.

Minutes later, bounding up State Street, she asked, ?Did I miss everything??

And seeing her in the crowd, when I?m so used to seeing her under the lights, gave me a feeling even a wordsmith such as myself cannot describe. There?s a lot to be said for mere presence.

So, come on, ladies. This is warfare. Let?s really freak out the squares and go commando.

Liss Vickery rocks a Fender Telecaster (1972 reissue) on a half-stack Marshall amp. If you think your gear is better, you?re wrong. If you disagree, let her know at lissvickery@yahoo.com.